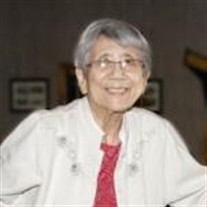 Junko Nakayama Clymer, 85, of Nichols, New York, passed away peacefully in her sleep on September 10, 2015, after an extended illness. She was born March 21, 1930, in Yokohama, Japan, daughter of the late Dizo and Shigeko (Harayama) Nakayama. Junko was a home-economics student in Japan when she met and married Sam Clymer in 1952. She came to the United States and raised a family of five children. Junko was proud of her Japanese heritage and enjoyed sharing her knowledge of Japanese culture. She worked as a translator for companies in the Tioga County area, and taught Japanese at local schools and to private students. For many years, she was a member of the Japanese Club of Broome County. Junko was well known for her excellent sewing and tailoring skills. She was a member of the Tioga Center Baptist Church. She was predeceased by her husband, Calvin "Sam" Clymer in 1989, a son Richard L. Clymer in 2001, and grandson Joseph Hanyen in 2014. She is survived by a daughter Janet and Fred Brown, of Apalachin, NY; sons Gary and Roseanne Clymer, Robert and Sue Clymer, and Bryon and Carol Clymer, all of Sayre, PA; grandchildren FJ Brown, Amanda Brown Reeves, Jennifer Mosier, Sarah Hanyen, Hillary Clymer Smith, Alicia Price, David Wilkerson, Joseph Clymer, Joshua Clymer, and Jessica Clymer Bailey; great-grandchildren Jonathan Soltis, Liam Brown, Aiden Reeves, Kaitlin Reeves, Alex Mosier, Erica Culver, Brittany Wilkerson, McKenzie Wilkerson, Ryan Rossi, Nicholas Rossi, Isaiah Rossi, Michaela Clymer, Emma Barnhart, and Samuel Bailey. She is also survived by two sisters in Japan, and nieces and nephews. A Memorial Service will be held at Tioga Center Baptist Church in Tioga Center, NY, on Thursday, September 17, 2015, at 6:00 pm. Burial will be held at a later date at the convenience of the family. Memories and condolences may be shared by visiting our website at www.sutfinfuneralchapel.com Caring assistance is being provided by the Cooley Family of the Sutfin Funeral Chapel, 273 S. Main St. Nichols

Junko Nakayama Clymer, 85, of Nichols, New York, passed away peacefully in her sleep on September 10, 2015, after an extended illness. She was born March 21, 1930, in Yokohama, Japan, daughter of the late Dizo and Shigeko (Harayama) Nakayama.... View Obituary & Service Information

The family of Junko Clymer created this Life Tributes page to make it easy to share your memories.

Send flowers to the Clymer family.