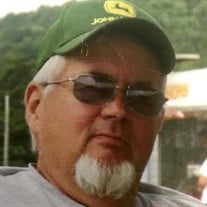 Surrounded by those who meant the world to him, Larry W. Brown, 72, of Windham, Pa passed away peacefully on Saturday afternoon, November 10, 2018 at the Robert Packer Hospital. Larry was born on December 30, 1945 in Sayre, Pa a son of the late Walter and Louise (Casterline) Brown. He was a graduate of Northeast Bradford High School class of 1963. It was a beautiful fall day on October 3, 1964 when Larry married the love of his life, Lois Sampson. Together they have shared fifty-four years of marriage. As a dedicated Dairy Farmer, Larry worked alongside with his brother Bob until 2004 when his health began to decline. Always willing to help others, Larry could be found giving a helping hand to those in need. Larry and his family enjoyed sharing their love for John Deere tractors and would often be found riding on them at local parades. Larry had a keen sense of sound, and could recognize the “putt putt” of a John Deere tractor before actually seeing it. He will always be remembered for his “gift to gab” and could strike up a conversation with anyone. His kindness and gentle ways will always remain in our hearts forever. Larry will be greatly missed by his loving wife Lois; his children: Kevin (Becky) Brown of Windham, Pa; Shelley Brown (Richard Wilson) of Fellsmere, Florida; David (Joy) Brown of Windham; he was affectionately known as Poppy to his grandchildren: Monica, Megan, Cody, Caleb, Justin, Troy and Jaycee; a great granddaughter Raelynn. His sisters-in-law: Ruth (Richard) Franklin, Linda Crawford and Sharon Brown. Several nieces, nephews and their families also survive. Larry was predeceased by his parents Walter and Louise Brown, a brother Robert Brown; brother-in-law Eugene Crawford and a sister-in-law: Jean Sampson. A casual gathering for friends and family will be held on Tuesday, November 13th from 4 to 8 pm at the Sutfin Funeral Chapel, 273 S. Main St., Nichols. Come as you are, wearing your favorite John Deere clothing and share your favorite memories of Larry with us. A funeral service and celebration of Larry's life will be held on Wednesday, November 14, 2018 at 10 am at the Sutfin Funeral Chapel.Memories and condolences may be shared by visiting his guest book at www.sutfinfuneralchapel.com Those who wish may kindly consider a memorial contribution to the Twin Tier Tractor Club, Joan Ely, 5977 Route 187, Sugar Run, Pa 18846 in loving memory of Larry W. Brown.

Surrounded by those who meant the world to him, Larry W. Brown, 72, of Windham, Pa passed away peacefully on Saturday afternoon, November 10, 2018 at the Robert Packer Hospital. Larry was born on December 30, 1945 in Sayre, Pa a son of the... View Obituary & Service Information

The family of Larry W. Brown created this Life Tributes page to make it easy to share your memories.

Surrounded by those who meant the world to him, Larry W. Brown,...