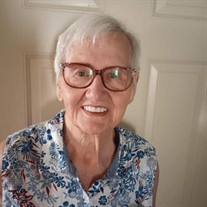 To Watch Laura Jean’s Service ClickHere Laura Jean Strunk, 92, of Endicott, NY and formerly of Lounsberry, NY passed away peacefully at her home with her daughters by her side on Monday, November 29, 2021. Laura was predeceased by her parents Fred and Myrtle Allyn, her husband Thomas William “Bill” Strunk, brothers: Eugene (Nora) Allyn, Harley (Jean) Allyn, Henry Allyn, Dever (Betty) Allyn, sisters: Geraldine (Ralph) Cressman, Phyllis (John) Brennan; her daughter Carol Faye Loefstedt, son-in-law: John Patton, granddaughter-in-law: Ashley Paludi Hill, grandson-in-law Frank Supulveres. Laura will be greatly missed by her daughters: Sharyl K. Patton, Billie J. (Mark Demmons) Taylor, Ruth E. (Michael Smith) Odom, Bobbi J. (Thomas) Krause; her grandchildren: Robin (Jeffrey) Reynolds, Sarah (Erik Kniefer) Taylor, Tara (Sean) Murphy, Laura Supulveres, Taylor Hill, Austin (Ashleen Speen) Taylor, Madison Krause, Sydney Krause; great grandchildren: Kaite Simons, Joseph Supulveres, Paul Supulveres, Daniel Hill, Nora Hill, Declan Murphy and Jackson Kniefer. Her Sister-in-law: Gladys Allyn; numerous nieces, nephews and their spouses and children also survive. Laura was born on August 4, 1929 the youngest of seven, born to Fred and Myrtle Edna (Coffman) Allyn. Laura Jean was born and raised in the area of Warren Center, PA. With four brothers and two sisters, life was busy and no doubt more than a little havoc was raised around the area. She graduated from Warren Center High School and went on to Ridley Secretarial School in Binghamton, NY (later to become Ridley Lowell). Laura met her husband Thomas William (Bill) Strunk via letters she wrote on behalf of his brother, Ed, while Bill was stationed overseas. However, this quickly transitioned into letters directly to Bill and they were married in 1948 after his return. Bill was not a fan of the name Laura, so to Bill and to many she became Jean, but not to the Allyn family. To the Allyns' she was forever Laura. Laura Jean, always the caregiver began her married life bringing both her mother and her mother-in-law into their home to live. Thereafter they produced four daughters in five years. Eighteen years later a fifth would appear. Their home was always filled with girls, their friends and later their boyfriends and Laura Jean loved every minute of it. She loved to cook for anyone and everyone, including many an individual she may have just met. Strangers for dinner were not strange to her family. (During the flood of 2006, Laura made and distributed sandwiches driving through neighborhoods during the clean- up) The Allyn family loved their time together and so the home in Lounsberry was often busting at the seams with aunts, uncles, nieces and nephews (26 cousins to be exact). Family meant the world to Laura and they loved her in return. Being the youngest of her siblings she helped care for many of her brothers and sisters, their spouses and her parents. This later led to her decision to become a Hospice Volunteer for many years, which brought her so much joy. One person wrote, she was a "dynamic woman who left her mark on so many." Not to say that Laura Jean did not have a career...starting out working at the Robert Packer Records Room, proceeding to become a typesetter for the Owego Gazette (her grammar and spelling were exceptional) and ending as a Support Investigator for the Tioga County Department of Social Services. Laura retired early from D.S.S. to babysit full time, along with Bill, her six grandchildren. It was her most precious job, and such a blessing for her daughters. The yard was filled with swing sets, numerous bikes and a pool. A quote from her grandchildren: "She was a grandma we were lucky enough to call our own." After the kids had grown and Bill had passed Laura Jean moved to Endicott, NY. She filled her life with many a day at the Senior Centers where she was known as "The Shuffleboard Queen". It most definitely brought out her competitive nature. This and her Sundays in church with friends kept her extremely busy and happy. Laura's fondest wish was to always remain and die in her home with her dog, Mac. Her daughters succeeded in granting that wish as she passed peacefully in her home with her daughters Sharyl, Billie and Ruth by her side, and, of course, Mac. A period of visitation will be held on Sunday, December 5th from 12 – 2 pm at the Sutfin Funeral Chapel, 273 S. Main St., Nichols. A celebration of her life will follow at 2 pm. Laura will be laid to rest in the Riverside Cemetery, Lounsberry. Memories and condolences may be shared by visiting her guestbook at www.sutfinfuneralchapel.com Services will be streamed and can be viewed at https://my.gather.app/remember/laura-jean-strunk The family would like to thank two very special cousins, Roxann Callear and Terry Allyn for the many hours they spent with our mother. And, thank you to Dr. Freeland who was of immeasurable help in moms' care. In lieu of flowers the family requests that you make a donation to the Binghamton Rescue Mission, 56-58 Whitney Ave., Binghamton, NY 13901, or any of the Volunteer Fire and Rescue Departments of your choice.

To Watch Laura Jean&#8217;s Service [ClickHere]https://my.gather.app/remember/laura-jean-strunk Laura Jean Strunk, 92, of Endicott, NY and formerly of Lounsberry, NY passed away peacefully at her home with her daughters by her side on Monday,... View Obituary & Service Information

The family of Laura Jean Strunk created this Life Tributes page to make it easy to share your memories.

Send flowers to the Strunk family.