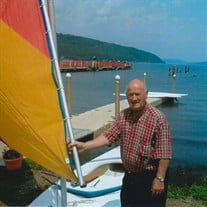 It broke our hearts to lose you, but you didn't go alone, for part of us went with you the day God called you home.....Lawrence A. Adams, 82, of Bath, NY went to his heavenly home and to be reunited with his loving wife Phyllis Jean on Tuesday,... View Obituary & Service Information

The family of Lawrence "Larry" A. Adams created this Life Tributes page to make it easy to share your memories.

Send flowers to the Adams family.