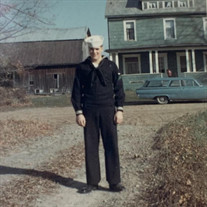 When someone you love becomes a memory… the memory becomes a treasure ~ Lawrence Ray Morgan, 75, of Windham Twp., Rome, PA passed away on Sunday, August 1, 2021 at the Robert Packer Hospital, Sayre, Pa following a brief period of declining health. “Morgie” as he was affectionately known as by his family and friends was born on August 27, 1945 in Binghamton, NY a son of the late Clifford Burdette and Marion Rhoda (Watts) Morgan. He was a gradate of Northeast Bradford High School class of 1963. Following graduation, he enlisted into the US Navy and proudly served his country from 1963 to 1966. A proud Navy veteran, he was honored to have crossed the equator four times and traveled the world twice. Following his discharge, he assisted in the operation of the Strope family farm. On July 15, 1967 he married the love of his life and classmate Lorna Lawrence and together they shared 54 years of marriage. Larry was a long-time employee of Masonite and retired from Osram-Sylvania following 28 years of service. A talented woodworker and craftsman, he owned “The Wooden Mouse” He could handcraft just about anything from benches to wine glass holders. The Wooden Mouse would take he and Lorna throughout the area attending craft shows and visiting with those who would stop at their booth. When not attending craft shows, memories were also made when Morgie and Lorna would travel to their favorite spot Colonial Williamsburg. Morgie is survived by his wife Lorna; his grandchildren: Amber Marie and Nathan Andrew; great grandchildren: Connor and Noah; his sisters and brothers-in-law: Joyce (Michael) DeSisto; Barbara (Robert) Neill; Janice (Bob) Bliss; his aunt Sister Ruthe Morgan; a brother-in-law: Larry “Unk” Lawrence; several nieces, nephews and their families also survive. Larry was predeceased by his parents; his son Timothy Morgan and a brother Richard. Family and friends are invited to attend a period of visitation on Thursday, August 5th from 12 to 1 pm at the Sutfin Funeral Chapel, 273 S. Main St., Nichols. A funeral service and celebration of his life will follow at 1 pm. He will be laid to rest in the Jillson Cemetery. Memories and condolences may be shared by visiting his guestbook at www.sutfinfuneralchapel.com Those who wish may kindly consider a memorial contribution to a charity of one’s choice in loving memory of Lawrence R. “Morgie” Morgan.

When someone you love becomes a memory&#8230; the memory becomes a treasure ~ Lawrence Ray Morgan, 75, of Windham Twp., Rome, PA passed away on Sunday, August 1, 2021 at the Robert Packer Hospital, Sayre, Pa following a brief period of declining... View Obituary & Service Information

The family of Lawrence "Morgie" Ray Morgan created this Life Tributes page to make it easy to share your memories.

When someone you love becomes a memory… the memory becomes a...

Send flowers to the Morgan family.