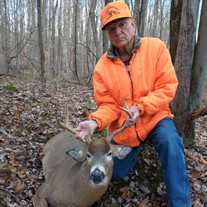 To Watch Lawrence's Live Stream Click Here You left us beautiful memories, your love is still our guide, tho' we cannot see you, you're always by our side.... Our hearts were left broken Tuesday, December 14th, 2021 when we found that our beloved, husband, brother, father, grandfather, great grandfather, and friend, Lawrence E. Welch, 82, of Warren Center, Pa, passed away very suddenly and unexpectedly while undergoing surgery at Robert Packer Hospital in Sayre, Pa. Lawrence was a one-of-a-kind man. He loved his family and his friends with all he had and was so full of adventure in life. If you got a chance to know him, you are very lucky. He touched the lives of so many just by being in their lives. He was born April 21, 1939 in Endicott, New York, a son of the late Leon and Gertrude (Gregory) Welch. At the young age of 17, he left school and joined the US Army. Lawrence worked for General Electric, Martin Marietta, and Lockheed Martin for many years but his real love was working with his hands. He was very talented, and it showed. You could see his talents while he was woodworking in “Poppa’s workshop”, making many beautiful things such as rocking chairs, and items for his family that they will forever cherish now that he’s gone to be with God. Lawrence enjoyed the outdoors where he hunted and fished. One of his finest hunting exploits was catalogued in the September 1967 issue of Outdoor Life Magazine, when in 1964 while hunting in Maine, he shot a bear and a buck in quick succession and then returned home just in time for the birth of his son. His “jackpot hunt for $48” became a family favorite in which Lawrence got his bear and boy all at one time! Not to be overlooked, he was an avid fisherman/angler and he fished in where ever he could, including Outer Banks, NC, Alaska, Canada, Florida, Colorado, but no place could compare with Lake of Meadows. Lawrence absolutely loved traveling and could tell so many stories of the trips he had been on. He went to all 50 states and was grateful that his loving wife had gone to 49 of them with him. He especially loved to go to Canada and Alaska where he would hunt long hours hoping to bring home a good trophy. He cherished spending quality time with his grandchildren, and great grandchildren and together with Donna, attended Warren Center’s Baptist Church. Through this very difficult time, he will be forever loved and missed and kept in our hearts always. He is survived by his loving wife of 59 years, Donna Brown, his children, Mark (Vanessa) Welch, and Roxanne (Armando Jr.) Cisneros, his siblings, Leland (Linda) Welch, Irene Welch, Dorothy Pease, Mary (Glen) Haining, Eleanor Browning. His grandchildren, Patrick (Jordan) Connor, Ian (Jordan) Connor, Jordan Welch, Dylan Welch, Taylor Welch, his great grandchildren, Madalynn, Quinn, Owen, Christopher, Liam, and Kaidynce. His sisters-in-law and brothers-in-law: Thelma Welch, Alice Jamtrensky, Tom Brown, Karl Clink, Clara Sigler, Harry David (Pat) Brown, Debbie Brown. Many nieces, nephews and their families also survive. When God took him to Heaven he was rejoined with his Parents, his siblings: Albert (Anne)Welch, Ronald (Doris) Welch; Donald Welch, Eugene Welch, Frances (Bernard) Holden, Lillian (Larry) Beeman, Helen Brown, Lucille Clink; brothers-in-law and sisters-in-law: Chuck Pease, Fred Browning, Leigh (Stephanie) Brown, Fred Sigler, Carl Brown, Gale Welch (Goff). Family and friends are invited to attend a period of visitation to on Monday, December 20th from 4 to 6 pm at the Sutfin Funeral Chapel, 273 S. Main St., Nichols. (All NYS Guidelines will be encouraged) A memorial service and celebration of his life will follow at 6 pm with Pastor Larry Jennings, officiating. Memories may be shared by visiting his guestbook at www.sutfinfuneralchapel.com Those who wish may kindly consider a memorial contribution to the Warren Center Baptist Church of the Warren Twp., Vol. Fire Department in loving memory of Lawrence E. Welch.

To Watch Lawrence's Live Stream [Click Here]https://my.gather.app/remember/lawrence-welch You left us beautiful memories, your love is still our guide, tho' we cannot see you, you're always by our side.... Our hearts were left broken Tuesday,... View Obituary & Service Information

The family of Lawrence E. Welch created this Life Tributes page to make it easy to share your memories.


You left us beautiful...

Send flowers to the Welch family.