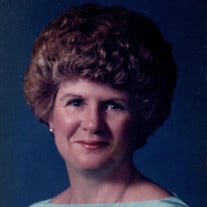 A mother holds her children's hands for a little while and their hearts forever.... Linda Eileen Houser, of Burlington PA, died Friday, May 20th 2022 and was taken into Heaven by her Lord and Savior Jesus Christ. She was 87. Recently a resident of Sayre Health Care Center, Linda was born in New York City on March 14th, 1935. The eldest of three children in a tight and loving Scandinavian community in Flatbush, she ventured west to attend Trinity College in Chicago and returned to Brooklyn to graduate from Kings County Community College of Nursing. In August of 1958 she married George Houser and they moved to Apalachin, NY where George started his job at IBM Owego. Linda and George had three sons, settling in Windham Summit, PA in 1970. There this city girl Linda, through the land, Peck Hill neighbors, and a welcoming home, became a woman at home in Bradford County. Linda and her family attended the Independent Baptist Church in Towanda throughout her life, learning to endure life’s trials through the preaching of God’s Word and the fellowship of God’s people. Not only social in her church-going, Linda thrived deeply in personal faith and community hope with the members of her IBC church. Applying her faith in Jesus, she was profoundly a woman of secret prayer, swaying life on earth by talking with Christ. In Windham Summit, she adapted her nursing skills to farm animals and frolicking boys of all ages. And her home was open to family and friends, to enjoy the beauty of God’s rural land. Her steadfast devotion to George across many years of marriage was a selfless example of love and respect to all. Linda’s commitment to the Gospel of Jesus spurred her to bring His grace to many lives. After her sons had finished schooling, Linda returned to the NYC area with George for a job and home on Long Island. Returning to PA, they built a new home in Burlington in 1999, graciously integrated by the loving neighbors in Bournes Mills on Codding Road. Their abiding kindness across Linda’s elderly years enabled her to stay at home, enjoying the country views she loved. Linda was diagnosed with Multiple Sclerosis at age 62 and was immobilized most of her last ten years. Yet by loving caregivers, watchful neighbors, and supporting church friends, she attended church many days in her wheelchair. Linda is predeceased by her husband of 57 years, George, in 2015. She is survived by her sister Monica Craig of Rockport IL and her brother Carl Johnson of Lancaster County PA, brother-in-laws Paul and Gary Houser of New York State. Her honoring sons and daughters-in-law are Gordon and Julia of Merritt Island FL, Jonathan and Donalene of Groton CT, and Brian and Ruth of Athens, PA. Her adoring grandchildren are Heidi Houser of FL, Jill (and Christian) Houser of CO, Cindi (and Evan) Smith of WA, Suzy Houser of FL, Autumn Houser of OH, Matt (and Ashley) Houser of MT, Pete (and Abby) Houser of RI, and Jack Houser of Philadelphia. She also leaves behind four great-grandchildren. Family and friends are invited to attend a memorial service on Saturday, May 28th at 10 am at the Independent Baptist Church, 109 Cherry St., Towanda, PA. The service will be live streamed through the Independent Baptist Church's Facebook page. Memories and condolences may be shared by visiting her guestbook at www.sutfinfuneralchapel.com Those who wish may kindly consider a memorial contribution to the Independent Baptist Church, 109 Cherry St., Towanda, PA 18848 in loving memory of Linda E. Houser.

A mother holds her children's hands for a little while and their hearts forever.... Linda Eileen Houser, of Burlington PA, died Friday, May 20th 2022 and was taken into Heaven by her Lord and Savior Jesus Christ. She was 87. Recently a resident... View Obituary & Service Information

The family of Linda E. Houser created this Life Tributes page to make it easy to share your memories.

A mother holds her children&#39;s hands for a little while and their...

Send flowers to the Houser family.