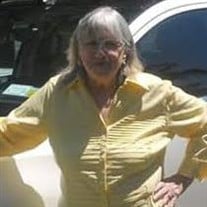 It was with a broken heart that Loretta M. Steele, 75, of Nichols passed away on Tuesday, February 19, 2019. She was reunited with her daughter Susan M. Ahlstrom-Allis who passed away on September 20, 2018 and her son Eric “Rick” John Ahlstrom who passed away on January 23, 2019. Loretta was born on December. 7, 1943, in Cambridge, Massachusetts a daughter of the late David and Blanch (Vigaent) Couture. On May 26, 1978, a spring like day Loretta married William D. “Bill” Steele ~ they have shared forty-one years together. She was a loving wife, mother, grandmother, great grandmother, sister and friend. Loretta cherished her family and was so blessed to have them close. She was a wiz at the game of scrabble and enjoyed a visit to the casino too. Loretta will be greatly missed by her husband William D. Steele; her children: Michael Ahlstrom; Christine (Ted) Ahlstrom and Brenda Ahlstrom; her step sons: Robert James Steele and John Benjamin Steele; a brother and sister-in-law: David and Diana Couture. Her nieces: Christine (Frank) Bognanni, Lisa (Ed) Fanikos, Stephani Couture Brown, Her nephew: Brian (Heather) Couture. Her special grandchildren: Kara (Matt) Vinson, Cortney Dixon, Bryan Ahlstrom, Chelsea (James) Smith, Alisha (Noah) Sackett, Jessa Ahlstrom, Amanda Moore, Megan Ahlstrom and Emily Ahlstrom; her great grandchildren: Kayla, Tyler, Tatiana, James Jr., Timber-Lynn, Hannah, Meadow, Haley Mae, Draven, Isis, Jazzmyn and Michael. In addition to her daughter Susan and Son Eric, Loretta was also welcomed into heaven by her granddaughter Ashley Dixon; and grandson Eric J. Ahlstrom, Jr. Family and friends are invited to attend a period of visitation and time of remembering the special gifts Loretta and Rick were to us on Saturday, April 27th from 10 to 12 pm at the Sutfin Funeral Chapel, 273 S. Main St., Nichols. A memorial service will follow at 12 pm at the funeral chapel. Memories, condolences or a favorite picture my be shared by visiting her guest book at www.sutfinfuneralchapel.com

The family of Loretta M. Steele created this Life Tributes page to make it easy to share your memories.

It was with a broken heart that Loretta M. Steele, 75, of Nichols...

Send flowers to the Steele family.