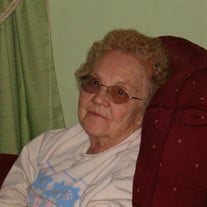 A mother holds her children’s hands for a little while….and their hearts forever ~ Mabel I. (Shear) Williams, 93, of Nichols went home to be with her Lord on Monday morning, September 28, 2015. Mabel was born on March 16, 1922 in Athens, PA a daughter of the late Luke P. and Matilda A. (Steele) Shear. She was a graduate of Athens High School class of 1941. On January 23, 1942, she married Howard S. Williams and together they celebrated 55 years together. Mabel’s heart was broken on her anniversary when Howard passed away in 1997. Mabel was a sixty-seven year member of the Nichols United Methodist Church, where she participated with the United Methodist Women. She was a longtime member of the Rebekah Lodge and for many years worked at Robert Packer Hospital in housekeeping. A true friend to many, Mabel always enjoyed a friendly visitor, whom she could share a cup of coffee with or at Christmas time the many nativity sets she collected. Mabel will be greatly missed by her children and their spouses: Christopher and Carole Williams of Nichols; Ann and Jay Ball of Waverly; her daughters-in-law: Irene Williams of West Virginia; Vicki Williams of Nichols. Her grandchildren: Michael, Catherine, James, Stephen, James, Jason, Justin, Jerred, Rainy, Abbey, and Jacob; great grandchildren: Rachel, Heather, Kaitlyn, Christopher, Krista, Kara, Tyler, Aaron, Elizabeth, Ashley, Kaitlyn, Tyler, Daniel, Nicholas, Noel, Zachery, Alyssa, Payton, Alex, Anna, Noah, Kaden, McKenna, Antonio and Andrew; and nine great great grandchildren. Several nieces, nephews and their families also survive. Mabel was predeceased by her husband Howard, her sons, Stephen and James; siblings: Luke Shear, Philip Shear, Ina Forsyth, Alice Geiger, infant sisters Helen and Susie; a grandson Joey; and great granddaughter Katrina. Family and friends are invited to attend a period of visitation on Thursday, October 1st from 4 – 7 pm at the Sutfin Funeral Chapel, 273 S. Main St., Nichols. A Rebekah service of remembrance will be held at 6 pm. A period of visitation will also be held on Friday from 10 am until the time of the service. A celebration of her life will be held on Friday, at 11 am at the funeral home with Rev. Mary Jean Simonin and Pastor Sandra Thomas, officiating. Interment will follow in the Nichols Cemetery. Memories and condolences may be shared by visiting our website at www.sutfinfuneralchapel.com Those who wish may kindly consider a memorial to the Nichols United Methodist Church, 122 Bliven St., Nichols, NY 13812

The family of Mabel I. Williams created this Life Tributes page to make it easy to share your memories.

A mother holds her children’s hands for a little while….and their...

Send flowers to the Williams family.