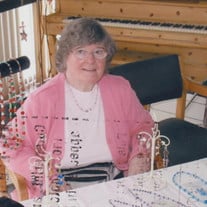 Margaret “Doreen” (Redmond) Blair, 87, of Troy, Pa passed away peacefully with her family at her side on Wednesday evening, October 7, 2015. Doreen, as she was lovingly known by her family and friends was born on August 18, 1928 in England, a daughter of the late Arthur and Ethel (Connor) Redmond. She treasured her family, enjoyed needle craft arts, doll making, miniatures, reading, crossword puzzles. She is survived by her son David Blair (Kaye Stroud) of Troy, PA with whom she resided; grandsons: Louis Blair of Wyalusing; Robert Blair of Long Beach, Long Island; granddaughters Ashley Blair of Williamsport, PA, Madalyn Blair of South Williamsport, PA, and their mother Sara Blair also of South Williamsport, PA; great grandchildren: Camrin and Kaleb Blair. Her sister Patricia M. Newman; Sister-in-law Pat Redmond, cousin David Connor, nieces: Wendy Finch, Heather Pannett, Paul Newman, Catherine Hockey; Sally Rising. She was predeceased by her parents; Husband Henry Fredrick Blair in 1990; a brother Barrie in 1999; and a brother-in-law: Kenneth in 2013 A gathering for family will be held at the convenience of the family at the Sutfin Funeral Chapel, 273 S. Main St., Nichols. Memories and condolences may be shared by visiting our website at www.sutfinfuneralchapel.com Those who wish may kindly consider a memorial contribution to The Troy Library or Guthrie Hospice in loving memory of Margaret “Doreen” Blair.

The family of Margaret "Doreen" Blair created this Life Tributes page to make it easy to share your memories.

Send flowers to the Blair family.