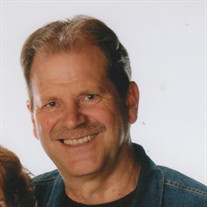 A heart of gold stopped beating, two willing hands at rest, God broke our hearts to prove to us…He only takes the best ~ Michael Forys, 62, of LeRaysville, Pa passed away on Thursday, December 24, 2015 following complications during his courageous battle with cancer. Michael was born on May 11, 1953 in Sayre, Pa a son of Geraldine (Ayers) and the late Fred Forys. He was a graduate of Northeast Bradford High School class of 1971. On June 4, 1977 he married Lynn Chaffee and together they made LeRaysville their home. He was a retired employee of DuPont following over 30 years of service. Mike enjoyed the peaceful reflections of being outdoors and spending time on his 4-wheeler. He was an avid New York Giants fan, enjoyed golfing ~ although his greatest pleasure was being surrounded by his girls and his pride and joy ~ his grandchildren. Mike will be greatly missed by his loving wife of 38 years, Lynn; his daughters: Kelly and her husband Matthew Donahue of Frederick, Maryland; Kim and her husband Todd Legg of Brackney, Pa; Kari and her husband Taylor Smith of Montrose, Pa; his special grandchildren: Weston Donahue, Zachary and Colin Legg; Ava Bell, Ayden and Alexander Smith; his mother Geraldine Forys of LeRaysville, Pa; sisters: Teresa (Jim) Savage of Friendsville, Pa; Cindy Robinson of Rome, Pa; Mary Souto of LeRaysville, Pa; his mother-in-law: Minnie Chaffee of Rome, Pa; brother-in-law and sister-in-law: Brian and Loretta Chaffee of Rome, Pa; several aunts, uncles, nieces, nephews and cousins also survive. Michael was predeceased by his father Fred Forys and his father-in-law: Ellis “Pete” Chaffee. Dad, until we meet again, may you find comfort in the arms of angel. Family and friends are invited to attend a period of visitation on Tuesday, December 29th from 2 – 5 pm at the Sutfin Funeral Chapel, 273 S. Main St., Nichols. A memorial service and celebration of Mike’s life will follow at 5pm. Memories and condolences may be shared by visiting our website at www.sutfinfuneralchapel.com Those who wish may kindly consider a memorial contribution to the Bradford County Humane Society, PO Box 179, Ulster, Pa 18850 in loving memory of Michael Forys.

A heart of gold stopped beating, two willing hands at rest, God broke our hearts to prove to us&#8230;He only takes the best ~ Michael Forys, 62, of LeRaysville, Pa passed away on Thursday, December 24, 2015 following complications during... View Obituary & Service Information

The family of Michael Forys created this Life Tributes page to make it easy to share your memories.

Send flowers to the Forys family.