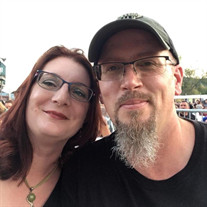 Our hearts were broken on Sunday, November 22, 2020 with the sudden passing of our husband, father, son, uncle, and friend, Michael David Parks, 46, of LeRaysville, PA. Mike was born on February 8, 1974, at the Naval Hospital in Quantico, Virginia. At a young age he moved with his mother to Burlington, PA, changing from a Navy family to an Army family with the remarriage of his mother, Crystal Dunham, to Manville Parks. Mike never left the Bradford County area. In 1990, and in the 10th grade, Mike had his first date with the girl who would steal his heart, Jenn Kipp. A courtship continued for five years and on May 25th, 1996 Mike and Jenn started their lives together. They both loved the hills of Pennsylvania and being able to raise their girls there and having them graduate from their alma mater. Mike was a graduate of Northeast Bradford High School class of 1992. Following graduation, Mike continued his education and graduated from Penn College where he earned his Associates Degree in Building and Construction Technology in 1995. Mike was currently working at the Robert Packer Hospital in Sayre as a Maintenance Technician and was the proud recipient of the “Leader of the Quarter” twice. Although coming from a diverse family, Mike never differentiated between who was blood-related and who was not. He loved all of his family and poured his own time and effort into each equally. You did not have to have the last name Parks to be considered a family member. He was the 2nd dad to many young adults in his neighborhood, he would open his doors to anyone in need. Mike was fun, loving, and supportive. He was the kind of person who would listen in a time of trouble, stay the extra hour to help the girls practice their volleyball, and always looked forward to adopting a child off the Christmas tree. He truly had a big heart! Besides spending time with his family, Mike loved to go hunting, fishing, and hiking. Mike and Jenn always looked forward to time to visit family in Arizona, although there was no place like home. He especially loved the thrill of hanging on to the edge of a cliff when ice-climbing. Mike was also a member of the NRA and a 32nd Degree Freemason of the Blue Lodge in Towanda. He had a mean shot, not only with a gun, but also with his pool stick, he loved Thursday nights and being able to play pool with the Brick Pool Team. Although he kept his calendar full, Mike never liked being in the spotlight. He possessed a humble and down-to-earth nature. If he were to read this now, he would probably would not realize how many people he impacted with his devotion and friendship, his fingerprint has left a imprint on all our lives. Mike’s memory will be forever treasured by wife, Jenn; his two daughters: Wanda Lucille “Lucy” and Alexandria Michael Parks; his mother, Crystal Parks; siblings: Manville (Brenda) Parks, Jr. and Terry (Lorrie) Parks, Laura (Donald) Shaffer, Sophie German, Stephanie (Adam) Wilson, Justin (Alana) Alt, Christopher (Kelsey) Alt, and Donald Cook; his step-mother Dottie Roberts; aunts and uncles: Charles (Nancy) Dunham, Kay (James) Kelly, Ed Parks, Will Parks, Michelle Parks (Jerry Smith), and Cindy Yoder; his father and mother in-law Frosty and Darlene Kipp; his brother-in-law and sisters-in-law Sheryl (Michael) Kunik and Tom (Missy) Kipp. His memory will also live in his numerous nieces, nephews, cousins and their families. He is predeceased by his father Manville Parks, Sr., his uncle Alan Dunham and grandparents Clarence “Joby” and Ethel Parks and Wanda and J. David Dunham. Family and friends are invited to attend a period of visitation on Friday, November 27th from 11 to 1 pm at the Sutfin Funeral Chapel, 273 S. Main St., Nichols. Appropriate precautions will be taken for public health concerns when at the funeral chapel to include wearing masks and social distancing. A private family service and celebration of his life will be held at the convenience of the family. Memories and condolences may be shared by visiting his guestbook at www.sutfinfuneralchapel.com To remember Mike, he would love to have you remember a child this Christmas with a gift. Many churches, schools, or the Salvation Army’s Angel Tree have names available, or one can deliver a gift to Toys for Tots in loving memory of Michael David Parks. Let your light shine ~ Matthew 5:16

Our hearts were broken on Sunday, November 22, 2020 with the sudden passing of our husband, father, son, uncle, and friend, Michael David Parks, 46, of LeRaysville, PA. Mike was born on February 8, 1974, at the Naval Hospital in Quantico,... View Obituary & Service Information

The family of Michael David Parks created this Life Tributes page to make it easy to share your memories.