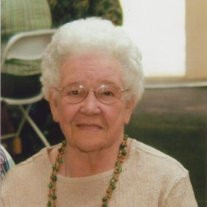 Softly in the morning you heard a gentle call, you took the hand God offered and quietly left us all…..Ontalee Barnes Wilson, 87, of West Warren passed away on Saturday morning, December 21, 2013 at her home. She was welcomed and greeted into heaven by her husband Carl E. Wilson, her parents Lilburn and Blanche Barnes; brother and sister-in-law Leonard and Arlene Barnes; sister and brother-in-law Eleanor Barnes and Clayton Canfield and daughter-in-law Joan S. Wilson. Ontalee was born on November 13, 1926 in Warren Township, Pa a daughter of the late Lilburn J. and Blanche Manchester Barnes. She attended school in Warren Center and was a graduate of the LeRaysville High School class of 1944. On March 30, 1946, at the Warren Center United Methodist Church, she married Carl E. Wilson ~ together they shared nearly 47 years of marriage until his passing on March 22, 1993. Ontalee was a member of the First Congregational Church of West Warren, where she actively participated with the Ladies Aid. She will be fondly missed for her chocolate cake with peanut butter icing and her wonderful baked beans. In addition, Ontalee was a member of the Warren Township Fireman’s Ladies Auxiliary. Many will remember Ontalee as their school bus driver for over forty-two years. A heart of gold stopped beating, two willing hands at rest, God broke our hearts to prove to us, He only takes the best. Ontalee will be dearly missed by her sons and daughters-in-law: Gordon and Mable Wilson of West Warren; Roger and Cathy Wilson of Carthage, NC; her grandchildren: Greg (Carrie) Wilson; Robin (Ryan) Wilson Kingsley; Lindy Wilson (Roger) Freeze; great grandchildren: Roxanne, Carl, Rachel Kingsley; Dalton, Lacy and Caleb Wilson; Jacob Freeze. Several nieces, nephews and their families also survive. Family and friends are invited to attend a period of visitation on Monday, December 23, 2013 from 2-4 and 6-8 pm at the Sutfin Funeral Chapel, 273 S. Main St., Nichols. Funeral services and a celebration of Ontalee’s life well lived will be on Tuesday, December 24, 2013 at 11 am at the First Congregational Church of West Warren with Pastor David Pitcher and Pastor Anne B. Canfield, officiating. Interment and prayers of committal will follow in the Darling Cemetery. Memories, condolences and pictures may be shared by visiting our website at www.sutfinfuneralchapel.com Those who wish may kindly consider a memorial contribution to the First Congregational Church of West Warren; the Darling Cemetery, or the Warren Township Fire Department in loving memory of Ontalee Barnes Wilson.

Softly in the morning you heard a gentle call, you took the hand God offered and quietly left us all&#8230;..Ontalee Barnes Wilson, 87, of West Warren passed away on Saturday morning, December 21, 2013 at her home. She was welcomed and greeted... View Obituary & Service Information

The family of Ontalee Barnes Wilson created this Life Tributes page to make it easy to share your memories.

Send flowers to the Wilson family.