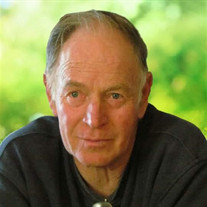 A life well lived is a precious gift, of hope and strength and grace, from someone who has made our world a brighter, better place….. Well known and respected dairy farmer and former Nichols Fire Chief Paul Friedrichsen, 75, of Nichols passed away on Wednesday evening, November 7, 2018 following a brief period of declining health. Paul was born on November 29, 1942 in New York, New York a son of the late Christian Detlef and Helen (Hansen) Friedrichsen. At a young age, Paul moved to Nichols and the family farm was established. Paul was a graduate of Tioga Central High School Class of 1960. When the farm chores were completed, Paul escaped to the Sayre Roller Skating Rink, there he met a beautiful young gal named Cindy ~ together they would skate several times a week. Cindy and Paul were married on July 3, 1965, at the Athens Presbyterian Church and together they have shared 53 years of happiness. Dedicated to serving others, Paul joined the Nichols Village Fire Department and in 1968 was instrumental in establishing the Nichols Joint Fire District. For over fifty years, Paul served on the Board of Fire Commissioners for the Nichols Fire Department. In addition, Paul also served as Chief and Assistant Chief. Many fellow firemen throughout the area always looked to Paul for instruction and training with fire equipment. In 1987, the Nichols Fire Department purchased Fire Truck 711 ~ this was Paul’s truck and will be the truck that will lead him to his final place of rest. In 2013, Paul was recognized by his fellow firefighters of the Nichols Fire Department for fifty years of dedicated service. Paul was a member of the New York State Fire Chief’s Association, enjoyed attending farm auctions, and visiting with his friends at Gail’s Restaurant. Paul will be greatly missed by his loving wife Lucinda “Cindy” Friedrichsen, his children: Michael (Tracey) Friedrichsen; Brian (Tisha) Friedrichsen, and Karen (Erdem) Kilic; his special grandchildren: Christianna, Nicholas, Lucas, Tyrus, Madison, Max Friedrichsen; Selin Kilic, Madison and Taylor Roberts. His sister Marien Klett; a sister-in-law Margaret (John) Crowley and brother-in-law John (Chris) Crane. Several nieces, nephews, and many special friends. Paul was predeceased by his sister Helen Richter, his parents and his brothers-in-law Carl Klett and Ronald Richter. Family and friends are invited to attend a period of visitation and time of sharing memories on Sunday, November 11th from 1 to 4 pm at the Sutfin Funeral Chapel, 273 S. Main St., Nichols. A celebration of Paul’s life will be held on Monday, November 12th at 11 am at the Sutfin Funeral Chapel. Memories, condolences or your favorite picture of Paul may be shared by visiting his guest book at www.sutfinfuneralchapel.com Those who wish may kindly consider a memorial contribution to the Nichols Fire Dept. PO Box 334 , Nichols, NY 13812 in loving memory of Paul Friedrichsen.

A life well lived is a precious gift, of hope and strength and grace, from someone who has made our world a brighter, better place&#8230;.. Well known and respected dairy farmer and former Nichols Fire Chief Paul Friedrichsen, 75, of Nichols... View Obituary & Service Information

The family of Paul Friedrichsen created this Life Tributes page to make it easy to share your memories.

Send flowers to the Friedrichsen family.