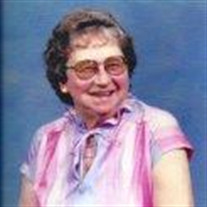 Philathea Bolles (Foote) Murdock of Nichols, NY, after 102 years on this earth, passed away on February 6, 2015 at Elderwood at Tioga Healthcare in Waverly, NY. Born July 9th, 1912, she was the youngest of four children and the only surviving daughter of the late Frank and Luella (Goodrich) Bolles. Mom graduated at the top of her high school class in Greene, NY and did a lot of living in her time. Married twice, she outlived both of her husbands, Paul Foote and Stephen Murdock. While living in Nichols, she was very active in various groups and organizations, including the Nichols United Methodist Church, Friends of the Cady Library, and Senior Citizens. She was a beloved Girl Scout leader, UMW member, Sunday School teacher, and choir member. In her 70s she started her clown act, creating 3 distinct characters, and visiting nursing homes, performing at churches, community events and schools. Her home on the corner of Main and Life was always open to friends, neighbors, kids and teens, who called her “Ma Murdock”. Visitors were always welcome and served tea and homemade cookies around the kitchen table. Her crafts – ceramics, embroidery, and cloth painting among others – often left with visitors. Plants and baked goods also found their way into friends’ hands upon leaving. Mom loved to travel, and was willing to go any time. Her penchant for travel served her well on her jobs as a saleswoman for various businesses over the years, and she made many friends among her customers. In her later years, she would transport anyone who needed a ride, and would often deliver meals or flowers to those unable to leave their homes. Not bad for a woman who learned to drive after she was widowed at the age of 54. A generous woman who was both frugal and giving, she taught us to make do with what we had, appreciate our blessings and share with others. She also bequeathed her love of chocolate. Mom lived in Nichols for 53 years before age and health dictated she live at Elderwood. Surviving family include daughter Paula (Foote) Lane and spouse Alan; son Gary Foote and spouse Dolores; daughter Meleta (Murdock) Baker and spouse Dan; son Mark Crimmins-Murdock, and spouse Marianna. Also surviving are grandchildren Alecia Lane ONeill; Charles, Carey, Sheldon and Derek Foote; Emily Murdock Baker and six great-grand children. Also surviving are “adopted” kids Nancy Carter, Mary Davis, Cary Harned, and Tina Ridgeley, and special nephew Orlow Cramer. Many thanks to her friends in Nichols, too numerous to name, who helped look after her while she resided in her home, allowing her to stay there as long as she did. Thanks also to Elderwood at Tioga for such wonderful care and respect during her residency there, and to Sutfin Funeral Chapel for their personal involvement and professional expertise. Friends and family are invited to attend a period of visitation on Tuesday, February 10th from 1 -2:30 pm at the Sutfin Funeral Chapel, 273 S. Main St., Nichols. A memorial service and celebration of her life well lived will be held at 3 pm with Pastor Dan Martin officiating. Interment will be in Worchester, NY (next to her parents) at the convenience of the family. Memories and condolences may be shared by visiting our website at www.sutfinfuneralchapel.com Those wishing may make a contribution in her memory to the Nichols United Methodist Church, 59-1 Main Street, Nichols, NY 13812, Community Care Network of Nichols, PO Box 100, Nichols, NY 13812, Friends of the Cady Library, PO Box 70, Nichols, NY 13812 or a charity of one’s choice.

Philathea Bolles (Foote) Murdock of Nichols, NY, after 102 years on this earth, passed away on February 6, 2015 at Elderwood at Tioga Healthcare in Waverly, NY. Born July 9th, 1912, she was the youngest of four children and the only surviving... View Obituary & Service Information

The family of Philathea "Phil" Bolles Foote Murdock created this Life Tributes page to make it easy to share your memories.

Send flowers to the Murdock family.