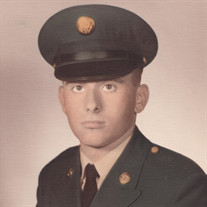 Ray Robinson, Sr. went to be with the Lord on Friday, September 6, 2019 after a long battle with Leukemia. He was predeceased by his parents, George and Charlotte Robinson. He is survived by his wife Sandra; his sons: Ray, Jr. and Clifford (Sofia); his sisters: Gayle (David) Cooley and Shirley Robinson; his nieces: Rhaylene and Victoria; his great niece: Samantha; and Sandra’s grandchildren. Ray grew up on a 200-acre dairy farm in Athens, PA. He graduated from Northeast Bradford and served in the Army in Germany during the Vietnam War. He also was a graduate from Ridley Lowell Business Institute. Ray was employed by Wholesale Electric Lights Unlimited for over 25 years where he was well known as a great counter man and salesman. In later years he was employed by Friedman Electric and ID Booth. He enjoyed working part-time at night at numerous grocery stores, stocking shelves and as a night manager at Loblaws, Shusters, Great American and most recently at Walmart in Sayre. As you can see, he loved to work (What some others in our country should learn how to do, and yes, he would approve this message.) Ray enjoyed watching his Eagles, Dodgers and Mets play but his greatest joy was to watch and play golf. Every Saturday morning, make no other plans for him. He was going to be somewhere when the sun came up, teeing off. He had the privilege of playing in the 1982 BC Open ProAm in which his team won the championship. He also enjoyed watching his sons play softball. Never take for granted the relationships you have with your family members and that you will have unlimited times together. In a flash that could all be taken away from you. Ray’s graveside services will be held at Nichols Cemetery on Saturday, September 14th at 11am. Any memorial donations may be made to any Vietnam Veterans charity that you may wish to donate to. Memories and condolences may be shared by visiting his guest book at www.sutfinfuneralchapel.com Caring assistance is being provided by the Cooley Family of the Sutfin Funeral Chapel, 273 S. Main St., Nichols.

Ray Robinson, Sr. went to be with the Lord on Friday, September 6, 2019 after a long battle with Leukemia. He was predeceased by his parents, George and Charlotte Robinson. He is survived by his wife Sandra; his sons: Ray, Jr. and Clifford... View Obituary & Service Information

The family of Ray L. Robinson Sr. created this Life Tributes page to make it easy to share your memories.

Ray Robinson, Sr. went to be with the Lord on Friday, September...

Send flowers to the Robinson family.