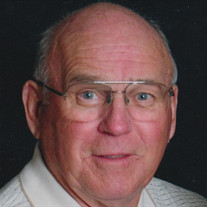 Those we love don’t go away, they walk beside us every day. Unseen, unheard, but always near, so loved, so missed, so very dear….Our hearts were broken on Friday afternoon, May 31, 2019 with the passing of our loving dad, grandpa, great grandpa, brother, uncle and friend Raymond E. “Ray” Horton, 86, of Smithboro. Ray, as he was affectionately known by his family as “Curly” was born on November 14, 1932 in Sheshequein Township, Pa a son of the late Murray Martin and Edna Pauline (French) Horton. Ray was a graduate of the Waverly High School and proudly served his country with the US Navy from 1951-1955. On a cold November 15th in 1953, Raymond married Patricia Heyman, together they shared nearly 62 years of marriage until her passing on March 11, 2015. Ray was employed at the Grand Union for several years and for over twenty-five years was employed by IBM – Owego. Ray was a devoted member of the Smithboro United Methodist Church and the Tioga Masonic Lodge #534. For many years, Ray oversaw and was caretaker of the Smithboro Cemetery. He was an avid hunter, fisherman and treasured the many family camping trips. A true sports enthusiast, Ray always looked forward to attending Tioga and Waverly sporting events. In addition he also enjoyed watching the Dodgers and NY Giants play. Morning coffee at the Dandy and attending the IBM Retirees Breakfast Club were the highlight of his days. The glimmer in his eye and smile will be greatly missed by his family. Those left to cherish Ray’s memory are, his children Stephen D. and his wife Rebecca Horton of Chemung; Cheryl A. Horton of Spencer, and Susan and her husband Robert Walkley of Tioga Center, his sister Patricia Carol Luther of Waverly; his special grandchildren: Anthony and Stefanie Horton; Nathon and Jessica Horton; Jason Horton; Gregory and Justina Walkley; Janelle Walkley; Scott Walkley; and Kari Walkley; his great grandchildren: Travis, Henry, Everett, Averie and was anxiously awaiting the arrival of his newest great grandson in September. His brothers-in-law and sisters-in-law: Kathi and Richard Andress who were our special angels and caregivers to Dad over the last year; Earle “Sonny” and Jan Heyman; Barbara and Bernard Vallilee; Ray is also survived by special friends: Marcia O’Donnell, John and JoAnne Goble, Paul and Shirley Madigan, Judy Catlin, Doug and Linda Kinney, Pat and Patti Kinney, Mary Lou Kinney and Sean Monagan and Fred Michel. Numerous nieces, nephews and their families also survive. We are so grateful for the kindness shown to us by Dr. Barb and the love and care offered by Dr. Ian Stuppal and Dr. Yalamanchilli ~ your gentle ways will be with us forever. Ray was predeceased by his parents, his wife Patricia and a brother Richard Horton. Abiding with his wishes, services will be held at the convenience of the family in the Smithboro Cemetery. Those who wish may kindly consider a memorial contribution to the Tioga Center Emergency Squad, PO Box 185, Tioga Center, NY 13845 or the Smithboro United Methodist Church, PO Box 37, Nichols, NY 13812 in loving memory of Raymond E. Horton. Memories, condolences or your favorite photo may be shared by visiting his guest book at www.sutfinfuneralchapel.com

Those we love don&#8217;t go away, they walk beside us every day. Unseen, unheard, but always near, so loved, so missed, so very dear&#8230;.Our hearts were broken on Friday afternoon, May 31, 2019 with the passing of our loving dad, grandpa,... View Obituary & Service Information

The family of Raymond E. Horton created this Life Tributes page to make it easy to share your memories.