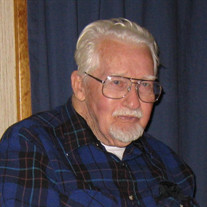 Jesus said, “I am the light of the world, He that follows me shall not walk in darkness but shall have the light of life.” ~ John 8:12 Raymond F. Willson, 93, of LeRaysville, Pa was called home on Tuesday, February 17, 2015 following a brief illness. Raymond was born on February 10, 1922 in Marcellus, NY a son of the late Victor J. and Gertrude (Pattison) Willson. He attended school in Athens, Pa. On April 30, 1945 he married his sweetheart Elnora May Williams in Brownwood, Texas when Raymond was stationed in the US Army. They would have celebrated their 70th wedding anniversary this year. He proudly served his country from October 1942 to February 1946 during World War II. Raymond was stationed in the Philippines. Raymond was a member of the Community Bible Church in Little Meadows and a member of the VFW Post 6824 of Rome for many years. He also was a proud member of the National Rifle Association. Raymond enjoyed spending time outdoors and actively hunted until this last fall. He worked at Bendix Corporation/Eclipse Machine Company in Elmira for 34 years, retiring in 1975. Raymond was known as a great story teller and had a sharp mind for remembering details. He will be greatly missed by his family. Raymond will be missed by his wife Elnora; his sons and daughters-in-law: James and Donna Willson of Concord, NC; Thomas and Margaret Willson of Rome, Pa; Raymond and Robin Willson of Box Elder, South Dakota; daughter Claudia Willson of Lockwood, NY; son-in-law Earl Gamble of Warren Center, Pa; his special grandchildren: Susan, William, David, Joshua, Jacob, Angela, Faith, Heidi, Heather and Tasha; great grandchildren: Avery, Emily, Lucas, Nicholas, Sierra, Ryan, Jack, James, Maddox, Madeleine, Josh and Cassidy. His sisters and brothers-in-law: Dorothy and Ed Hinkle of Salina, Kansas; Betty Imlay of Rock Hill, South Carolina. Raymond was predeceased by his parents, an infant daughter Glenora; daughter Paula Gamble in 2008; a great grandson Lance Dakota Gamble; brothers: Donald, Glen, and Victor James (who was MIA/KIA during WWII) sisters, Ruth Willson Gray of Indiana, Pa; Marion Willson Puckett, Ulysses, Kansas; special nephews: Roy Chandler, Kevin Chandler, David Gray; special niece Karen Chandler Howland. Family and friends are invited to attend a period of visitation on Saturday, February 21, 2015 from 11 – 1 pm at the Community Bible Church, Little Meadows, Pa. A funeral service and celebration of Raymond’s life will follow at 1 pm with his pastor, Rev. Dale Anschuetz, officiating. Interment will follow in the Warren Center Cemetery. Memories and condolences may be shared by visiting our website at www.sutfinfuneralchapel.com. Those who wish may kindly consider a memorial contribution to the Wounded Warrior Project, 4899 Belfort Rd, Ste. 300, Jacksonville, FL 32256 or Samaritan’s Purse, PO Box 3000, Boone, NC 28607 in loving memory of Raymond F. Willson. Caring assistance is being provided by the Cooley Family of the Sutfin Funeral Chapel, 273 S. Main St., Nichols.

The family of Raymond F. Willson created this Life Tributes page to make it easy to share your memories.

Jesus said, “I am the light of the world, He that follows me...

Send flowers to the Willson family.