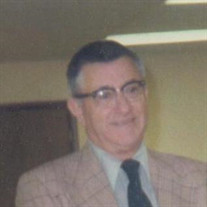 Reuben William Brimmer, 98, a life-long resident of Rome, Pa passed away at the home he was born in on Saturday, December 5, 2015. Reuben was born on January 12, 1917, a son of the late John James and Cora (McCabe) Brimmer. He attended school in Rome and graduated from Rome High School class of 1936. On March 25, 1944, he married Genevieve Hansell and they have resided at the family residence since. Reuben owned a dump truck and work for the state for several years. In addition he also worked at the Rome Post Office and on many occasions substituted for his father as rural carrier, and was acting Post Master for three years. Upon leaving his position at the Post Office, Rueben began his salesman career at Perry Chevrolet and later selling for Robert Ferrario Chevrolet and retired in 1980 following 23 years. He attended GM School in Morristown, NJ and was honored as a member of the Region of Leaders Club for 19 years for selling Chevrolets. Rueben was a devoted members of the Rome Presbyterian Church since 1931 and served as an Elder since 1953. He was a 50+ year member of the Roman Lodge 418 Free and Accepted Masons; former president and member of the Rome Vigilante Fire Company; a life member of the Elks Lodge; the National Rifle Association and was a former member of the Boat Club and Towanda Gun Club. Ruben loved the outdoors, camping, hunting, fishing and gardening. He was also an avid sports lover, played baseball and was on his High School basketball team and the Rome Comets team for four years. Ruben was a loyal supporter of the Northeast Bradford Sports teams and attended many of their games. He also was a supporter of higher education and has presented an athletic academic scholarship to a Northeast High School deserving student since 1997. Reuben was predeceased by his wife Genevieve R. Brimmer on January 17, 2015; his parents John James and Cora (McCabe) Brimmer; three brothers ~ Hugh R. Brimmer, George R. Brimmer and Robert L. Brimmer. Rueben is survived by his nieces, nephews and their families along with his loving caregivers and many special neighbors. A special thank you for the care and support shown to Rueben by his caregivers and to Guthrie Hospice for the love and tender care given. Friends are invited to attend a period of visitation on Tuesday, December 8, 2015 from 12 – 1 pm at the Rome Presbyterian Church. A funeral service and celebration of Rueben’s life will follow at 1 pm with Pastor David A. Dewing, officiating. Interment and prayers of committal will be in the Rome Cemetery. Memories and condolences may be shared by visiting our website at www.sutfinfuneralchapel.com Those who wish may kindly consider a memorial contribution to the Reuben Brimmer Athletic Scholarship Fund at Northeast Bradford High School, 526 Panther Drive, Rome, Pa 18837 or Guthrie Hospice, 421 Tomahawk Rd, Towanda, PA 18848 in loving memory of Reuben William Brimmer. Caring assistance is being provided by the Cooley Family of the Sutfin Funeral Chapel, 273 S. Main St. , Nichols.

Reuben William Brimmer, 98, a life-long resident of Rome, Pa passed away at the home he was born in on Saturday, December 5, 2015. Reuben was born on January 12, 1917, a son of the late John James and Cora (McCabe) Brimmer. He attended... View Obituary & Service Information

The family of Reuben William Brimmer created this Life Tributes page to make it easy to share your memories.

Send flowers to the Brimmer family.