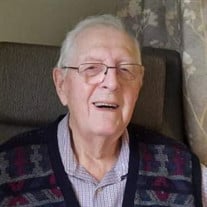 To Watch Rex's Live Stream of his service: ClickHere A life well lived is a precious gift, of hope and strength and grace. From someone who has made our world, a brighter, better place ~ Rexford C. Russell, 92, of Orwell Twp., Pa passed away on Wednesday evening, March 30, 2022 at the Robert Packer Hospital, Sayre. “Rex” as he was affectionately known by his family and friends was born on November 9, 1929 in Elmira, NY. He was the son of the late Cleveland and Irene (Cron) Russell. Rex spent his childhood in Orwell and at the young age of six was guided by his father in the woods and introduced to the Maple Syrup Business. Over the years, the business grew to which is now a sixth-generation business known as the Endless Mountains Cabin Maple Syrup. Rex attended a one room school in Orwell and later graduated from Rome High School class of 1947. Farming was also a way of life for Rex, many will remember him as their Corn Salesman or servicing their Massey Ferguson Tractors. Rex loved to spend time outdoors, he loved the beauty of the land and enjoyed hunting. He was a member of the Orwell Bible Church where at one time he served as a trustee. Rex loved to sing and his Baritone Base voice could be heard across the room and could brighten anyone’s day. He was a member of the Towanda Rotary, the Roman Masonic Lodge and played on many area bowling leagues. Rex will be greatly missed by his wife of nearly 29 years, Janet Benjamin Russell; his children: Nancy Russell, Sheila Russell (Terry Cobb), Marilyn Russell (Richard Boyd) Lincoln (Dawn) Russell, Ray (Diane) Hotaling, Lynn Edelman, Lisa Kornacki. His sister Margie Newton; special grandchildren: Brian Wacker, Elizabeth Wacker, Chad Russell, Jennifer (Kevin) Pardoe-Maines, Todd (Janette) Pardoe, Matthew (Alycia) Pardoe, Lauren Boyd, William Russell, Danielle Russell, Katherine Lindemann, Kalen Lindemann, Elise (Michael) Salsman, Britney Kornacki, Joseph Kornacki. Several great grandchildren. A niece Renee’ (Rob) Broschart and family; a nephew Ralph (Jennifer) Newton and family. He was predeceased by his parents; a son Larry Russell; great grandson Andrew Pardoe, son-in-law: John Wacker, brothers-in-law: David Benjamin, Arden Newton; sister-in-law: Dolores Tillotson. Family and friends are invited to attend a period of visitation on Saturday, April 2nd from 6 – 8 pm at the Sutfin Funeral Chapel, 273 S. Main St., Nichols. A funeral service and celebration of Rex’s life will be held on Sunday, April 3rd at 2 pm at the funeral chapel. A private graveside service will be held on Monday in the Orwell Valley Cemetery. Memories and condolences may be shared by visiting his guestbook at www.sutfinfuneralchapel.com Those who wish may kindly consider a memorial contribution to the Orwell Bible Church, 1749 Orwell Hill Rd. Rome, PA 18837, HOPS Ambulance, 6185 Herrickville Rd., Wyalusing, PA 18853, or the Rome Fire Dept., PO Box 77, Rome, PA 18837 in loving memory of Rexford C. Russell.

To Watch Rex's Live Stream of his service: [ClickHere]https://my.gather.app/remember/rexford-russell A life well lived is a precious gift, of hope and strength and grace. From someone who has made our world, a brighter, better place ~ Rexford... View Obituary & Service Information

The family of Rexford C. Russell created this Life Tributes page to make it easy to share your memories.

To Watch Rex&#39;s Live Stream of his service:
ClickHere