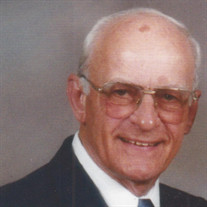 Softly in the morning, you heard a gentle call, you took the hand God offered you and quietly left us all… Richard A. Smith, 92, of Bumpville, passed away peacefully at the home of his son and daughter-in-law Daryl and Nancy Smith on Friday morning, January 25, 2019. Dick, as he was affectionately known by his family and friends was born on September 24, 1926 in Akron, Ohio a son of the late Herman and Isabelle Smith. He was a graduate of Rome High School and proudly served his country with the US Navy. Dick was a long time employee of Du Pont where he was an engineer. On September 1, 1950 he married Alma Sampson and together they shared 59 years of happiness until her passing on February 28, 2009. A talented musician, Dick enjoyed playing the accordion, the piano and listening to Frank Sinatra music. He will be greatly missed by his children: Dale Smith, Daryl (Nancy) Smith, Donna (Bill) Repsher, Duane (Kim) Smith. His grandchildren: Tim Smith, Laura Dolgos, Melissa Smith, Monica Russell, Bill Repsher Jr., April Russell, Kristin Wilson, David Smith, Shawna Clinton, Walter Smith, Marcus Smith. His Great Grandchildren: Nicolas Smith, Samantha Smith, Leah Russell, Dylan Russell, Kayla Russell, Meg Russell, Nevaeh Russell, Jonathan Russell, Asa Pickering, Kloey Repsher, Grayce Repsher, Cody Russell, Luke Russell, Tyler Russell, Hannah Russell, Madison Wilson, Alesha Smith, Micah Smith, Nico Smith and Angela Smith. Several nieces, nephews and their families also survive. He was predeceased by his wife Alma L. Smith; his grandsons Jonathan Smith, Paul Smith, a granddaughter Angela Smith, and his siblings Janice Kissel and Walter Smith. Family and friends are invited to attend a period of visitation on Tuesday, January 29th from 3 to 4 pm at the Sutfin Funeral Chapel, 273 S. Main St., Nichols. A funeral service and celebration of his life will follow at 4 pm with Pastor C. Kenneth Crain, officiating. Interment will be held at a later date in the Towner Hill Cemetery. Memories and condolences may be shared by visiting his guest book at www.sutfinfuneralchapel.com Those who wish may kindly consider a memorial contribution to Compassionate International, a Christian humanitarian aid child sponsorship organization dedicated to the long-term development of children living in poverty around the world, at www.compassion.com in loving memory of Richard “Dick” A. Smith.

Softly in the morning, you heard a gentle call, you took the hand God offered you and quietly left us all&#8230; Richard A. Smith, 92, of Bumpville, passed away peacefully at the home of his son and daughter-in-law Daryl and Nancy Smith on... View Obituary & Service Information

The family of Richard "Dick" A. Smith created this Life Tributes page to make it easy to share your memories.