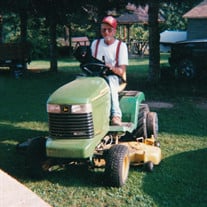 It broke our hearts to lose you, but you didn’t go alone, for part of us went with you the day God called you home…..Richard E. Horton, 75, of Main Street, Ulster, Pa passed away peacefully on Wednesday, March 29, 2017 at the Athens Health and Rehab Center following a brief period of declining health. Richard was born on April 5, 1941 in the Town of Barton, NY a son of the late Lloyd and Sara (Kuykendall) Horton. He was a 1959 graduate of Northeast Bradford High School. For many years Dick was a farmer and traveled many area roads as a truck driver. An avid outdoor enthusiast, Dick enjoyed hunting, fishing, cruising on his four wheeler and loved to tour the country side in his Jeep. He also enjoyed attending tractor pulls and reminiscing about old time tractors and NASCAR racing. Dick will be forever missed by his children: Duane Horton of Litchfield, Pa; Dan and his wife Tammy Horton of Tioga, Pa; Deann Horton of South Carolina; Dean Horton of Rome, Pa; and Dayton and his wife Lois Horton of Rome, Pa; his long time companion Shirley Johnson; special grandchildren: Heather Horton, Katelyn Warner, Destiny Horton, Lucas Horton, Paige Horton, Felicia Mosier and Darrel Mosier; a niece: Phylann Nemeth and nephew George (Vicki) Nemeth. Dick was predeceased by his parents and a sister Phyllis Nemeth in 2014. A time of remembering will be held on Friday, April 7th from 4 to 6 pm at the Sutfin Funeral Chapel, 273 S. Main St., Nichols. Memories and condolences may be shared by visiting his guest book at www.sutfinfuneralchapel.com Those who wish may kindly consider a memorial contribution to the Sayre VFW, 932 West Lockhart Street, Sayre, Pa 18840 in loving memory of Richard E. Horton.

The family of Richard E. Horton created this Life Tributes page to make it easy to share your memories.