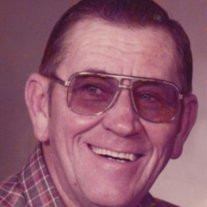 Richard &#8220;Dick&#8221; Bowen spent his 82 years being described as so many wonderful things. To some, he was the man who constantly helped and gave to his community. To others, he was the big guy who could fix and drive anything on wheels,... View Obituary & Service Information

The family of Richard "Dick" W. Bowen created this Life Tributes page to make it easy to share your memories.

Richard “Dick” Bowen spent his 82 years being described as so...

Send flowers to the Bowen family.