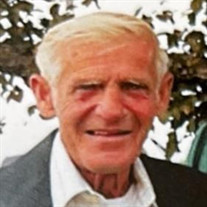 "What we once enjoyed and deeply loved we can never lose, for all that we love deeply becomes part of us." On Thursday, January 20, 2022, Robert “Bob” S. Reyan, 77, of Warren Center, PA, passed away peacefully at his home. Bob was born in Bronx, NY on Tuesday, February 22, 1944, and was the eldest of eight siblings of Irene Mojeko. He left the city in his teens for Northeastern Pennsylvania, where he met and married the love of his life, Jennie. They were married for 54 years before she predeceased him on September 12, 2018. After high school, Bob served in the US Army, reaching the rank of Sergeant (E-5) within two years and earning the National Defense Service Medal and the Good Conduct Medal. After leaving the service, he and Jennie made a home in Northeastern Pennsylvania, living in Neath, PA for more than 50 years. Bob was known for his strong work ethic and commitment to doing things right. For more than four decades, he was a self-employed contractor who enjoyed building homes and remodeling as well as home repair and maintenance—just not at Jennie’s home. Bob is survived by his son Robert “Rob” and daughter-in-law Holly of Friendsville, PA: his daughter, Stacy Reyan of Alexandria, VA; and his grandsons Tanner and Reirdan, of whom Bob was so proud. He is preceded in death by his Irish twin, Julie “Joe” Reyan, and survived by Joe’s wife, Phyllis of Houston, TX. He is also survived by brothers Stanley Reyan of Rocky Point, Long Island, NY, Charles “Chuck” Reyan of Friendsville, PA; sisters Mary (Jay) Tyma of McConnelsville, OH; Karen (John) Poulos of Islip, NY; Lynn (Michael) Ruggiero of Lake Mary, FL; and Anne (Chris) McDonnell of Port St. Lucie, FL. Other survivors include Anna (Jim) Rogers of Factoryville, PA; Irene (George) Schillet of Moosic, PA; Pauline Reid of Scranton, PA; and Joann (Harry) Acosta of Tumwater, WA; many beloved nieces and nephews by birth and marriage, dear friends Jim and Shirley Inman, Rochester, NY, his primary caregiver, Anthony Arthur of New York, New York and his grand dog Milo. A memorial service for Bob will be held at the Neath Church (4702 Williams Road, Warren Center, PA 18851) on April 23, 2022, at 11:00 am. Following the service, Bob and Jennie will be laid to rest in the Neath Cemetery together, then a celebration of life reception will follow at the Neath Hall. All friends and family are welcome. Those who wish may kindly consider a memorial contribution to the LeRay Lodge No. 417, Free & Accepted Masons, 1044 Main Street, LeRaysville, PA 18829 or the Vet Assist, 11975 Westline Industrial Drive, St. Louis, MO 63146 www.veteranshomecare.com Memories and condolences may be shared in his guestbook at www.sutfinfuneralchapel.com Caring assistance is being provided by the Sutfin Funeral Chapel, 273 S. Main St., Nichols.

The family of Robert "Bob" Reyan created this Life Tributes page to make it easy to share your memories.

&quot;What we once enjoyed and deeply loved we can never lose, for...

Send flowers to the Reyan family.