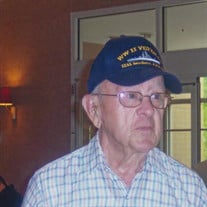 Robert E. “Bob” Cragle, 91, of Orwell Twp., Rome, Pa. Bob has enjoyed his last “trip around the block” with his loving wife of 64 years and has now entered into heaven. Bob passed away on October 8, 2015 surrounded by his wife, children and grandchildren at the Robert Packer Hospital. He was born on September 25, 1924 in LeRaysville, Pa the 9th child of the late Robert L. and Liva (Kocher) Cragle. He attended grade school at Wells Hollow and high school at Orwell Hill. After leaving high school in 1942 he moved to Endicott with his sister and worked for IBM farms in Endicott. He enlisted in the US Navy on March 27, 1943, and was sent to Sampson, NY for basic training, then transferred to Pensacola, Florida, US Naval Base. He was sent to San Diego, California to board ship on the USS Samborn where he served in the Third Division, named “The Fighting Third” The USS Sanborn was a part of the 5th Amphibioris Force, Pacific Fleet. After returning to the west coast he was discharged on June 10, 1946. Bob returned to Bradford County working on several local farms and on the Orwell Township road crew. He was one of the first employees for the Masonite Corporation where he worked as a Forester until his retirement in September 1986. He was a devoted husband, father, and grandfather. Bob took great pride in his home, garden, and lawn of which he was happy to say he continued to mow until 2015. When his grandchildren came along they named him Papa, which he loved. Papa and Nana were so happy to be host of many picnics, breakfasts, Karpauitz Christmas celebrations and especially the weddings of their grandchildren at Cragle Pond in their back yard. Bob and Iola enjoyed many trips throughout the US exploring the back roads and nature. He went on many hunting trips to many different states. In his later years, he enjoyed hunting in the Adirondacks with his friend Roger. An avid sports fan, and a true “NEB panther sports fan legend,” he even rooted for any baseball team that could beat the Yankees. Bob was a member of Rome Presbyterian Church, a life member of the Eastern Bradford Rod & Gun Club, Lifetime Member & Former Commander of VFW 6824 and Roman Lodge 418, F.&A.M. Bob will be greatly missed by his wife Iola; his son and daughter-in-law Curtis and Yvonne Cragle; his son-in-law James Philippi; his sister and brother-in-law: Grace and Robert Kunkel Sr; sister Eleanor Goodrich; his grandchildren: Delphine Cragle (Nate) Dewing; Michael (Jen) Cragle; Jamie Philippi (Maggie Woods); Lacey Philippi; Tyler Cragle (Laura Wheeler); Christy Philippi, Mary (Mitch) Brown; his great grandchildren: Mikayla Dewing, Jehiel Dewing, Joellyn Dewing, Creed Dewing, Levi Dewing, Jessie Dewing, Tye Dewing, Callie Cragle, Lex Cragle, and Kaden Watson; a brother-in-law and sister-in-law: John and Dawn Karpauitz, and many nieces, nephews and cousins also survive. Bob was predeceased by his parents Robert and Liva Cragle; a daughter Caren Cragle Philippi; his sisters and brothers-in-law: Lena and Elmer Bolton; Anna and Harold Groover; Alice and Fred Doughty; Arena and Harold Snedeker; Verna and John Malcom Russell. His brothers and sisters-in-law: Anthony and Betty Cragle; Ralph Cragle; Ross and Iva Cragle; brothers-in-law and sisters-in-law: Raymond and Betty Allis, Robert and Esther Karpauitz, Donald Karpauitz. Family and friends are invited to attend a period of visitation and time of sharing memories on Sunday, October 11th from 1 – 2 pm at the Sutfin Funeral Chapel, 273 S. Main St., Nichols. A memorial service and celebration of his life will follow at 2 pm with his pastor Rev. Dr. Karen Ballard, officiating. Military honors will be accorded at the funeral chapel following the services. A private family interment will be in the Darling Cemetery. Following the services a luncheon and time of sharing will also be held following the service at the Rome Presbyterian Church. Memories and condolences may be shared by visiting our website at www.sutfinfuneralchapel.com Those who wish may kindly consider a memorial to the Darling Cemetery, c/o Janice Hicks, 589 Gulf Rd, Rome, PA 18837 or the Rome Presbyterian Church Library, PO Box 189, 938 Main Street, Rome, PA 18837 or a charity of one’s choice in loving memory of Robert E. Cragle.

The family of Robert E. Cragle created this Life Tributes page to make it easy to share your memories.

Send flowers to the Cragle family.