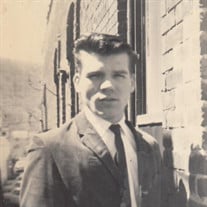 A heart of gold stopped beating, two willing hands at rest, God broke our hearts to prove to us, He only takes the best.... Robert M. Seymour, 82, of Peck Hill, Rome, Pa passed away peacefully with is family at his side on Saturday morning, August 1, 2020. Robert was born on July 2, 1938 in Elmira, New York a son of the late John and Evelyn (Sours) Seymour. He left school at an early age to enlist into the US Army. He proudly served his country from 1955 to 1957. Bob was a member of the VFW Post 6824, Rome, Pa. On February 15, 1962 in Towanda, Pa Bob married Marian E. Decker and together they shared 54 years of marriage until his heart was broken on May 10, 2016 when Marian passed away. For many years, Bob was employed as a machinist and was employed by various companies to include the Ingersoll Rand and he also drove delivery truck for Pargas. He treasured his family and always looked forward to gatherings at his home. Bob will be greatly missed by his children: Edward M. Seymour; Linda K. and her husband Tracy Yeagle; Stephen L. Seymour; Kevin R. Seymour. His special grandchildren: Eric Edward Seymour, Amelia Rose Seymour, Tyler Jacob Yeagle, Melinda Lee Seymour, Jarred Stephen Seymour, Ayla Marie Seymour, John Robert Seymour. His great grandchildren: Raelynn, Layla, and Chase. Special friend and caregiver Audra Vanderpool ~ your loving care and gentle touch you gave to our Dad will always hold a special place in our hearts. His sisters-in-law and brothers-in-law: Frieda and Ronald Smith, Shirley Blemle, Pat Vanderpool, Dorothy Hillard, Peggy and Jim Colby, Dorothy Decker, William Decker. Several nieces, nephews and their families also survive. Bob was predeceased by his parents John and Evelyn; his beloved wife Marian E. Seymour, his sisters: Evelyn “Pete” Vosburg and Shirley Silvernail; and a brother Donnie Seymour. Family and friends are invited to attend a period of visitation on Tuesday, from 10 to 12 pm at the Sutfin Funeral Chapel, 273 S. Main St., Nichols. A funeral service and celebration of Bob’s life will follow at 12 noon. Those attending the service will be asked to practice state required social distancing guidelines. Bob will be laid to rest next to his loving wife Marian in the Valley Home Cemetery, Windham. Full military honors will be accorded. Memories may be shared by visiting his guestbook at www.sutfinfuneralchapel.com Those who wish may kindly consider a memorial contribution to the VFW Post 6824, 1468 Haighs Pond Rd, Rome, PA 18837 or Guthrie Hospice for the loving care they gave to Dad in his final days at home, Guthrie Hospice, 421 Tomahawk Rd, Towanda, PA 18848 in loving memory of Robert M. Seymour.

A heart of gold stopped beating, two willing hands at rest, God broke our hearts to prove to us, He only takes the best.... Robert M. Seymour, 82, of Peck Hill, Rome, Pa passed away peacefully with is family at his side on Saturday morning,... View Obituary & Service Information

The family of Robert M. Seymour created this Life Tributes page to make it easy to share your memories.

Send flowers to the Seymour family.