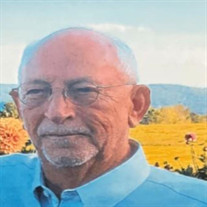 To Watch Roger's Service: ClickHere When tomorrow starts without me, try to understand an angel came and called my name, then took me by the hand.... Roger A. Pyhtila, 74, of Barton, NY passed away on Monday, February 21, 2022 at the Robert Packer Hospital, Sayre following a period of declining health. Roger was born on September 22, 1947 in Elmira, NY a son of the late Oscar and Diane (Hertel) Pyhtila. He was a graduate of the last class of Spencer High School in 1966. In 1967, he enlisted to serve his country with the US Army during Vietnam. On April 20, 1968 he married Linda Howey and together they have shared nearly 54 years of marriage. For over 32 years, Roger worked in construction serving Binghamton and the Elmira areas. He took great pride in his work and was honored to be part of the work on the Presidential helicopter pad. An avid car enthusiast, Roger loved to attend car shows and enjoyed reading car magazines. Roger enjoyed spending time outdoors whether it was watching Roland and the youth of the community at ValleyYHEC or fishing with his friend Vine Crouse. Family time was a treasured time for smiles and laughter. For over 65 years, it was a “National Holiday” when the Spencer Picnic took place. Roger always looked forward to seeing classmates and friends when attending. Roger will be greatly missed by his wife of nearly 54 years, Linda; his sons Ryan (Ellen Tilden) Pyhtila; Jeremy (Megan) Pyhtila; his grandsons: Roland and Hudson; brother Richard Pyhtila; sisters: Cathy Pyhtila; Carole (Alan) Cook; sister-in-law: Hilda Hertel; brother-in-law and sister-in-law: Jerry and Jackie Howey; several nieces, nephews and cousins also survive. He was predeceased by his parents and his brother Al Hertel. Family and friends are invited to attend a period of visitation on Friday, February 25th from 2 – 4 pm at the Sutfin Funeral Chapel, 273 S. Main St., Nichols. A memorial service and celebration of his life will follow at 4 pm. The family requests, those attending please wear a mask. Roger will be laid to rest in the Smithboro Cemetery. Memories and condolences may be shared by visiting his guestbook at www.sutfinfuneralchapel.com For those who wish they may kindly consider a memorial contribution to the ValleyYHEC, PO Box 156, Rome, Pa 18837 or the Smithboro United Methodist Church, PO Box 37, Nichols, NY 13812 in loving memory of Roger A. Pyhtila.

To Watch Roger's Service: [ClickHere]https://my.gather.app/remember/roger-pyhtila When tomorrow starts without me, try to understand an angel came and called my name, then took me by the hand.... Roger A. Pyhtila, 74, of Barton, NY passed... View Obituary & Service Information

The family of Roger A. Pyhtila created this Life Tributes page to make it easy to share your memories.

When tomorrow starts without...

Send flowers to the Pyhtila family.