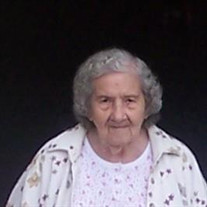 Rosa Lena Shafer, 89, of LeRaysville, Pa passed away peacefully at her home on Friday morning, February 19, 2016. She was born on February 27, 1926 in LeRaysville one of thirteen children to the late Edward and Lydia (Woodruff) Casselbury. She treasured her family, enjoyed playing cards and had a passion for collecting salt and pepper shakers. Rosa will be greatly missed by her sons and daughters-in-law: Stephen Jr. and Joyce Shafer; Terry Sr. and De Etta Shafer; four grandsons: Terry Jr. and his wife Dawn Shafer; Stephen Shafer III; Eric and his wife Sharai Shafer; Tim and his wife Nicole Shafer; a granddaughter Tracey and her husband Howard Gilbert. Nineteen great grandchildren: Mitch Thorman, Brittney and Tanner Shafer; Dakota, Zoe, Caleb, Madison, Logan Shafer; Marissa Snell, Dominick Brooks, Zachary, Courtney and Emma Shafer, Taylor and Mackenzie Johnson, Mickey and Rylee McKean; Tyler, Bryden, and Layne Shafer. A brother and sister-in-law: Francis and Dorothy Casselbury; sisters-in-law: Delina Casselbury and Florence Casselbury; many nieces, nephews and their families also survive. She was predeceased by her husband Stephen Shafer, Sr; and eleven sisters and brothers. Abiding with Rosa’s wishes, there will be no visitation or a memorial service. She will be laid to rest, next to her husband Stephen Sr. in the East Herrick Cemetery at a later date. Memories and condolences may be shared by visiting her guest book at our website at www.sutfinfuneralchapel.com Those who wish may kindly consider a memorial contribution to the HOPS Ambulance, c/o Mr. James Seipler, 606 Ridge Rd., Rome, Pa 18837 in loving memory of Rosa Lena Shafer. The Cooley Family and Sutfin Funeral Chapel at 273 S. Main St., Nichols is honored and privileged to serve the family of Rosa Lena Shafer.

Rosa Lena Shafer, 89, of LeRaysville, Pa passed away peacefully at her home on Friday morning, February 19, 2016. She was born on February 27, 1926 in LeRaysville one of thirteen children to the late Edward and Lydia (Woodruff) Casselbury.... View Obituary & Service Information

The family of Rosa Lena Shafer created this Life Tributes page to make it easy to share your memories.

Send flowers to the Shafer family.