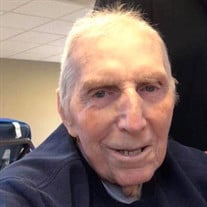 Russell “Jack” Hutchinson, 85, a lifelong resident of Cadis, Pa passed away on Thursday, January 10, 2019 at the Athens Health and Rehab Center. Jack, as he was known by his family and friends was born on May 15, 1933 in Cadis, Pa a son of Russell G. and Catherine A. (O’Connell) Hutchinson. He was a graduate of Vestal High School class of 1951. On October 28, 1961 he married Marion E. “Mamie” Wheaton and together they shared 56 years of marriage until her passing on February 21, 2018. Jack enjoyed hunting although his greatest pleasure was spending time on the farm. He took great pride in the operation of the family farm and was meticulous for its surroundings. Jack is survived by his sons and daughter-in-law: Christopher J. and Alicia Hutchinson; Mark M. Hutchinson; his special grandchildren whom he thought the world of and was so proud of their accomplishments: Zachary and Connor Hutchinson; his sisters and brothers-in-law: Janice and Rich Jacobs; Mary and Darrell Pitcher; his sisters-in-law: Dolores Wheaton, Sarah Tyrrell and Patricia Hutchinson; several nieces, nephews and cousins also survive. Jack was predeceased by his parents Russell and Catherine Hutchinson; his wife Marion E. “Mamie” Hutchinson; a son Robert “Bobby” Hutchinson; brothers: Gerald Hutchinson; Roy Hutchinson and Frank Hutchinson. Abiding with his wishes services will be held at the convenience of the family. Jack will be laid to rest in the St. Luke’s Cemetery in Warren Center, Pa. Memories and condolences may be shared by visiting his guestbook at www.sutfinfuneralchapel.com Those who wish may kindly consider a memorial contribution to the Alzheimer’s Association, 57 N Franklin St, Wilkes-Barre, PA 18701 in loving memory of Russell “Jack” Hutchinson. Caring assistance is being provided by the Cooley Family of the Sutfin Funeral Chapel, 273 S. Main St., Nichols.

The family of Russell "Jack" Hutchinson created this Life Tributes page to make it easy to share your memories.

Send flowers to the Hutchinson family.