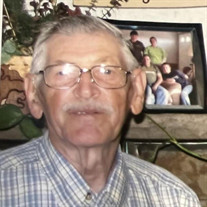 It broke our hearts to lose you, but you didn’t go alone for part of us went with you the day God called you home…. Russell W. Story, 93, of Barton passed away peacefully on Saturday, April 16, 2022 at the Robert Packer Hospital, Sayre, Pa following a period of declining health. Russ was born on March 19, 1929 in Burlington, VT a son of the late Henry and Elsie Marie (Kroplin) Story. At the age of 22, Russ entered into the US Air Force and proudly served his country. Following an honorable discharge in 1955, he returned to Owego to assist in the operation of the family farm. Russ was a long-time employee of Republic Steel and retired following 25 years of service. In addition, he also enjoyed spending time on the family farm where he could tend to his cows, chickens, ducks and be amongst mother natures beauty in his gardens. Russ will be greatly missed by his loving wife of 57 years, Ellen; his children: Russell E. and Krista Story; Mitch and Cindy Nichols; Douglas M. Nichols and Crystal G. Demarco; his daughter-in-law: Pat Nichols; his sister and brother-in-law: Ruth and Samuel Orme; his grandchildren: Matthew, Kaiden, Cassandra, Melissa, Gregory, Crystal, Cathy, Laurie, Autumn, Miranda, Justin. Several great grandchildren, nieces, nephews and their families also survive. Russell was predeceased by his parents; his son Gregory Nichols; his brothers: Charlie Story, Fred Story and sister Mary (Milton) Smith. Family and friends are invited to attend a period of visitation on Wednesday, April 20th from 10 to 11 am at the Sutfin Funeral Chapel, 273 S. Main St., Nichols. A funeral service will follow at 11 am with Bishop Kurt Bush, officiating. Russell will be laid to rest in the Nichols Cemetery. Memories and condolences may be shared by visiting his guestbook at www.sutfinfuneralchapel.com The family requests that memorial contributions be directed to an organization that helps our American Veterans.

It broke our hearts to lose you, but you didn&#8217;t go alone for part of us went with you the day God called you home&#8230;. Russell W. Story, 93, of Barton passed away peacefully on Saturday, April 16, 2022 at the Robert Packer Hospital,... View Obituary & Service Information

The family of Russell W. Story created this Life Tributes page to make it easy to share your memories.

It broke our hearts to lose you, but you didn’t go alone for...

Send flowers to the Story family.