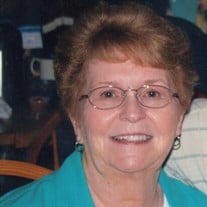 To Watch Shirley's life Stream ClickHere Shirley Marie (Langford) Rossi, 82, of Waverly, NY passed away peacefully in her sleep at home on January 2, 2022. Shirley was born on Friday, January 13, 1939, in Sayre, Pa to Gordon and Frances Horton Langford. She graduated from Athens High School in 1956 and began working as a billing clerk at the Label Processing Plant in East Sayre. It was there that she met her husband, Charles Rossi. They were married on July 2, 1958. Shirley worked in the Sayre High School Cafeteria and was active in the Elementary and High School Parent Teacher Association. She became a member of St. John Lutheran Church in 1958, where she and her husband led the youth group. She also spent many years teaching vacation Bible school. She served as Vice President of the Evangelical Lutheran Church of America’s Women’s group, was active in the church’s Shepherd and Prayer Circle Program, and as a greeter/usher. Shirley and her husband purchased Moreton Cleaners in 1981 and operated it with their children until her retirement in 2001. Shirley loved spending time with her beloved husband, children, and grandchildren. She enjoyed playing bocci ball, traveling, dancing, reading, cooking, baking, and riding their Harley Davidson. She is survived by her loving husband, Charles “Charlie”; her daughter Linda and son-in-law Bob Bidlack, Jr. of Sayre, PA, son Charles “Chuck” Rossi of Waverly, NY, and daughter Diane and son-in-law Robert “Bo” Guevara of Houston, TX. Her grandchildren: Tess and husband Stephen Long, Christian and wife Maddison Guevara, Emma Guevara, Ryan, Nicholas and his wife Sarah, and Isaiah Rossi, Jessica and husband David Sink. Her great grandchildren Harper and Henry Long, Taylor and her husband Steve Wright, Morgan, Keegan, Riley, Zander, Emma, Hudson, Nolan, Kylan, and Jaxton Sink. Her sisters E. Jean Winston, Sharon and husband Fleming Knudson of Chambersburg, PA, and brother, Ralph Langford of Idaho. Several nieces, nephews, cousins and their families also survive. Her sister-in-law and brother-in-law: Wilhelmina and Donald House of Sayre, PA, Anthony Rossi of Richmond, VA and sister-in-law Evelyn Rossi of Georgetown, TX. She was predeceased by her parents, Gordon and Frances Langford, her favorite uncle, Clarence Horton, sister-in-laws Marie (Ken) Snyder, Yolanda (Walter) Stickel, brother-in-laws John and Joe Rossi. A period of visitation will be held on Wednesday, January 5th from 1 – 2 pm at the Sutfin Funeral Chapel, 273 S. Main St., Nichols. A funeral service and celebration of Shirley’s life will be held at 2 pm. Shirley will be laid to rest at the Rossi Family Cemetery. Memories and condolences may be shared by visiting her guestbook at www.sutfinfuneralchapel.com For those unable to attend they may watch via Live Stream at: https://my.gather.app/remember/shirley-rossi

The family of Shirley M. Rossi created this Life Tributes page to make it easy to share your memories.

Send flowers to the Rossi family.