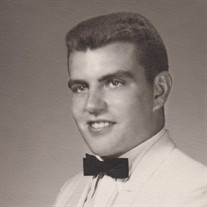 When someone you love becomes a memory, the memory becomes a treasure…..Spencer W. Briggs, 73, of Nichols, passed away at his home, Friday, May 15, 2015. Spencer was born on October 12, 1941 in Waverly, NY a son of the late Wilma (Rogers) and the late Spencer W. Briggs, Sr. He was a graduate of Tioga Central High School Class of 1961. Following graduation, Spencer enlisted into the US Army and proudly served his country until 1964. On June 2, 1962, he married Janice Folk and together they made Nichols their home. He was a long time employee of Singer Link and retired from Schweizer Aircraft in Horseheads. Spencer treasured the time spent with his family and also enjoyed fishing, hunting and was an avid NASCAR fan. He will be greatly missed by his wife of nearly 53 years, Janice Briggs, his sons: Spencer III and his companion Jenny Hunsinger; Stacey and his wife Stacy Briggs of Deposit; his brother: Kenn and Laura Briggs; his sisters: Billie Floyd; Penny Burrow; his special grandchildren: Cimara, Mercedes, Alonna and Peighton; his brothers-in-law and sisters-in-law: Doug and Lucille Folk; Stanley and Audrey Folk; Elmer and Mary Folk; Karen Hunsinger; several nieces, nephews and their families also survive. Spencer was predeceased by his parents Spencer W. and Wilma Briggs; his brothers James and Roger Briggs and a brothers-in-law Ken Floyd and Kevin Hunsinger. Family and friends are invited to attend a period of visitation on Tuesday, May 19th from 11 – 1 pm at the Sutfin Funeral Chapel, 273 S. Main St., Nichols. Funeral services and a celebration of his life will follow at 1 pm with Pastor Dan Martin, officiating. Interment will follow in the Nichols Cemetery. Memories and condolences may be shared by visiting our website at www.sutfinfuneralchapel.com Those who wish may kindly consider a memorial contribution to the Muscular Dystrophy Association, PO Box 97075, Washington, DC 20077-7258 (mda.org) in loving memory of Spencer W. Briggs, Jr.

The family of Spencer W. Briggs, Jr created this Life Tributes page to make it easy to share your memories.

Send flowers to the Briggs, family.