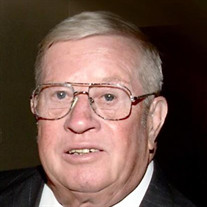 When someone you love becomes a memory, the memory becomes a treasure.... Stephen E. Shipman, 92, a lifelong resident of Waverly passed away peacefully at his home on Saturday, January 9, 2021. Stephen was born on November 18, 1928 in a farm house on Ellis Creek Road in the Town of Barton, one of eight children, to the late Stephen Raymond and Grace (Goble) Shipman. He graduated from Owego Free Academy in 1946 and promptly went to work on the farm. On November 18, 1950, he married Patricia A. Clark and together they have shared 70 years of marriage and many wonderful memories. Farming was a way of life for Stephen and Patricia as they operated their family farm until 1971. During that time, he served as a Committeeman for the Agriculture Stabilization and Conservation Service of Tioga County ~ one year as Chairman. Stephen also served as a Barton Committeeman for Tioga County Cooperative Extension and attended several courses in agriculture that Cornell University offered. In 1970, he was elected Highway Superintendent for the Town of Barton. Four years later he went to USS for the American Bridge and was employed as a Locomotive Engineer and a Crane operator. After they terminated operation in 1984, he was employed by Kitchen Specialties of Big Flats until 1987. He then was employed by Sumi Rail of Elmira Heights. In 1989 until 2005, he was employed by the Town of Barton. Loyal to his community, Stephen joined the North Barton Grange #45 in 1943 making him a 77-year member; in addition, in 1982 he joined as a member of the Sayre Elks Lodge #1148, a member of the Montour Falls Loyal Order of the Moose Lodge #426 joining in 1967. He also was a past member of the Waverly-Barton Fire Department. A dedicated and hard worker, Stephen worked tirelessly without end or complaint. He did this with the end goal in mind: the assurance that his family was safe, happy, and provided for. His devotion was rewarded in later life with many years in retirement spent as a grandfather and great grandfather. His hobby was keeping a daily journal for the last 38 years. He received his first journal from his wife Patty for Christmas in 1992. He wrote in his journal every day from Jan. 1, 1993 until the day before he passed away. He has left his children, grandchildren, and great grandchildren a wealth of insight into his everyday life. Stephen and Pat enjoyed traveling, making numerous trips statewide ~ including California, Las Vegas, Nevada, Texas, numerous deep-sea fishing trips to Massachusetts, a cruise to Alaska, cruises to both the eastern and western Caribbean, and an international trip to Ireland. They spent more than twenty winters in Florida’s sunshine, but always were grateful to come back home. In August 1999, they loaded up and drove across America, reaching California’s western coast. They also had a retreat on Mormon Lake that they spent more than thirty summers enjoying with both family and friends. There were many memories created with the cookouts, campfires, beer, and laughter. Those left to cherish his memory are his loving wife, Patricia; his children: Marcia (Joseph) Murray; Aloysius Shipman; Daniel (Cindy) Shipman; Curtis (Donna) Shipman. Grandchildren include Paul (Lindsay) Franks IV; Brian Fraley; Lindsay (Bill) Mariani; Aaron (Casey) Shipman; Jacqueline (Josh) Robinson; Ashley Shipman; Jeffrey (Amanda) Shipman; Abbey (Morgan) Shipman; Marley Shipman; his great grandchildren, who called him Big Grandpa, Elizabeth and Logan Stephen; Alivia and Riley; Maddie and Sydney; Elena Grace; and Jaden. His sisters-in-law: Jeanne Shipman and Rosemarie Shipman. Several nieces, nephews and numerous cousins also survive. He was predeceased by his parents; his siblings: Patricia (Thomas) Holton; Wilda (Robert) Eiklor; Seward Shipman; Terrance Shipman; Dennis (Barbara) Shipman; Hildegarde (Lewis) Goodwin; Jack Shipman and his daughter-in-law: Valerie Shipman. Family and friends are invited to attend a period of visitation on Thursday, January 14th from 1 to 4 pm at the Sutfin Funeral Chapel, 273 S. Main St., Nichols. Appropriate precautions will be taken for public health concerns when at the funeral chapel to include wearing masks and social distancing. A memorial service and celebration of Stephen’s life will follow at 4 pm. Those unable to attend may watch the service at https://my.gather.app/remember/stephen-shipman Memories and condolences may also be shared by visiting his guest book at www.sutfinfuneralchapel.com Those who wish may kindly consider a memorial contribution to the North Barton Grange, PO Box 679 1363 Ellis Creek Road, Waverly, NY 148952 in loving memory of Stephen E. Shipman.

When someone you love becomes a memory, the memory becomes a treasure.... Stephen E. Shipman, 92, a lifelong resident of Waverly passed away peacefully at his home on Saturday, January 9, 2021. Stephen was born on November 18, 1928 in a farm... View Obituary & Service Information

The family of Stephen "Ed" Shipman created this Life Tributes page to make it easy to share your memories.

Send flowers to the Shipman family.