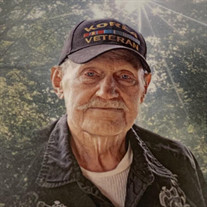 Surrounded by his family and those that meant the world to him, Theodore “Ted” J. Hills, Sr., 91, of Spencer, New York, passed away peacefully on Tuesday, August 10, 2021. Ted was born in Cuba, New York on September 16, 1929, one of thirteen children born to the late Claude and Esther (Hunt) Hills. Ted left school early to work on the family farm before enlisting in the U.S Army in 1950. He proudly served his country in the Korean War. On July 11, 1964 Ted married the love of his life Joanne ~ they spent over 57 years of happiness together. A man of many talents, Ted worked numerous jobs over his life. He spent three years owning and operating the family restaurant “Carousal Café” at Alpine Junction. A knowledgeable mechanic and a man who could repair just about anything, Ted went to work for Owego Home and Auto which later became D & B where he had the expertise to fix any AC and refrigeration problems that arose. Ted always remembered his farming roots and held a lifelong fondness for red tractors. In his spare time, Ted enjoyed reading, sewing, baking, and both wood and leatherworking. Family was extremely important to him. He especially enjoyed the holiday seasons and treasured the many memories shared as his family grew and grandchildren and great grandchildren would often visit. Having the gift to gab and being able to share his stories, Ted always enjoyed friendly visits from friends and neighbors on his front porch. He was an amazing father and doting grandfather, whose presence will be dearly missed. His fingerprint will forever be on the hearts of those that he loved especially his wife Joanne; his children and their spouses: Pennie Martin and Thomas Mazzocchi, Terry and James Volz, Jr., Bradley Hills, Theodore “Teddy” Hills, Jr. and Shannon Struzinski Hills, and Wendy Hills and Eric Slate; brother Keith (Roxanne) Hills; sisters: Linda (Fred) Brown, Judy (Garry) Wagner, and Gloria Huey; sister-in-law Susan (LeRoy) Relyea; brother-in-law Gary Chrysler; several grandchildren, great grandchildren, many nephews and nieces and his canine companion Holly. Family and friends are invited to attend a period of visitation on Monday, August 16th from 11 am to 1 pm at the Sutfin Funeral Chapel, 273 S. Main St., Nichols. A funeral service and celebration of his life will follow at 1 pm. He will be laid to rest in the Nichols Cemetery where full military honors will be accorded. Memories and condolences may be shared by visiting his guestbook at www.sutfinfuneralchapel.com

The family of Theodore "Ted" J. Hills, Sr. created this Life Tributes page to make it easy to share your memories.

Send flowers to the Hills, family.