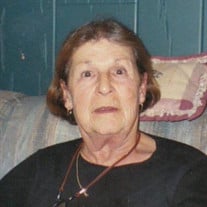 Theresa Elaine Baum, 85 When I come to the end of the road, and the sun has set for me, remember the love that we have shared, and that will comfort thee…Theresa Elaine Baum, 85, of Windham Township, Pa passed away peacefully on Monday morning, June 22, 2020 at the Bradford County Manor. Terry was born on June 15, 1935 at the Leominster Hospital in Leominster, Massachusetts a daughter of the late Archie N. and Marie (Beuchene) LeFebvre. For many years, Terry was a registered nurse at St. John’s Hospital in New York City and in Nashua, NH at St. Joseph’s Hospital. On April 27, 1957, following a few months of courtship, she married the love of her life Donald W. Baum. Together they have shared sixty-three years of marriage and were blessed with two children. Terry was a well-known horse woman, clinician and judge who competed in combined driving competitions, winning many ribbons. Terry also was involved with a therapeutic riding and driving program in Troy, NY. Terry and Don called Windham their home and established the “Fox Meadow Farm”. She was an avid collector of foxes and enjoyed creating many beautiful hand dyed hooked rugs. She enjoyed visiting Alaska, where they spent time fishing and sight-seeing, as well as Bermuda. Terry will be greatly missed by her husband Donald W. Baum; a daughter and son-in-law: Maryann and Richard McKee; her son and daughter-in-law: Wesley and Sharon Baum; her grandchildren: Melissa McKee, Jonathan Baum and Erin Baum. Great grandchildren: Ava, Gwen, Decklyn, Leo and Logan. Her siblings: her brothers: Eugene and Archie; and a sister Constance, as well as several nieces and nephews. The caring staff at the Bradford County Manor who lovingly cared for Terry for the last six years. A gathering for family will be held at the convenience of the family at the Sutfin Funeral Chapel, 273 S. Main St., Nichols. Memories and condolences may be shared by visiting her guestbook at www.sutfinfuneralchapel.com Those who wish may kindly consider a memorial contribution to the Alzheimer’s Association of America in loving memory of Theresa Elaine Baum. She is gone but will never to be forgotten!

The family of Theresa "Terry" E. Baum created this Life Tributes page to make it easy to share your memories.

Send flowers to the Baum family.