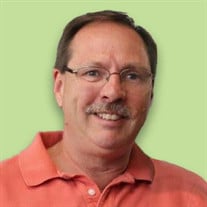 A live stream of Tim’s memorial service can be viewed here: clickhere Surrounded by his family and those that meant the world to him, Tim Lounsbury, 63, of Smithboro went home to be with his Lord on Thursday, June 3, 2021. He was reunited with his parents, John and Ann (Yaple) Lounsbury, his grandparents Lewis and Sylvia Lounsbury, Arthur and Nettie Yaple and his sister-in-law Julie Lounsbury. Tim will be greatly missed by his wife Ann (Carrigan) Lounsbury; his children: Tricia Braman (Joe Swan) and Aaron and Tara Lounsbury. His precious grandchildren who were the sunshine of his life Mackenzie and Abby Braman; Brayden, Brianna and Connor Lounsbury. His sister and brother-in-law: Becky and Bill Ryan; brothers and sisters-in-law: Clark and Sue Lounsbury, Dan Lounsbury, David and Tina Lounsbury. His sisters-in-law and brothers-in-law: Lois and Steve Totten, Janice and Earle Heyman. Special friends who were like family Doug and Erin Nichols; many aunts, uncles, nieces, nephews and cousins also survive. Tim started working for Allstate Insurance in September 1983. In May 1991, he opened the Lounsbury Agency in Owego and operated the business until it was transitioned to his son Aaron in August of 2014. Tim had a love for his community and continued to assist his son until his health declined. He always carried a smile whether it was seeing a friend at his grandchildren’s sporting events, spending time with family or having someone stop into the office. His love and support for his family will always be remembered. Tim was a member of the Owego Nazarene Church, past member of the Owego Rotary Club and was currently serving as a commissioner for the Tioga Fire District. Family and friends are invited to attend a period of visitation on Friday, June 11th from 4 to 7 pm at the Sutfin Funeral Chapel, 273 S. Main St., Nichols. A memorial service and celebration of Tim’s life will be held on Saturday, June 12th at 3 pm at the funeral chapel. A live stream of Tim’s memorial service can be viewed here: clickhere Memories and condolences may be shared by visiting his guestbook at www.sutfinfuneralchapel.com Those who wish may kindly consider a memorial contribution to the Tioga Center Fire Dept. PO Box 185, Tioga Center, NY 13845 in loving memory of Tim Lounsbury.

A live stream of Tim&#8217;s memorial service can be viewed here: [clickhere]https://my.gather.app/remember/tim-lounsbury Surrounded by his family and those that meant the world to him, Tim Lounsbury, 63, of Smithboro went home to be with... View Obituary & Service Information

The family of Tim Lounsbury created this Life Tributes page to make it easy to share your memories.

A live stream of Tim’s memorial service can be viewed here: clickhere

Send flowers to the Lounsbury family.