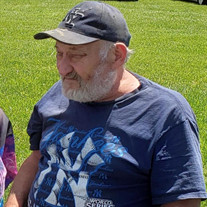 To Watch the Live Stream of Stan's Service ClickHere A limb has fallen from our family tree that says, grieve not for me. Remember the best times, the laughter, the song, the good times I lived while I was strong… Stanley Whitcomb Harris, 73, of Nichols, NY, passed away peacefully in his home on Thursday morning, December 16, 2021. Stanley was born on July 19, 1948, in Johnson City, NY, the son of George and Alice (Whitcomb) Harris. Stan graduated from Tioga Central High School and attended Onondaga Community College for a year before he decided it was not for him and entered the United States Air Force. He served his country for eight years, touring the states. After returning home to NY, he tried his hand at farming, but found his niche at Tioga Central School with custodial work where he was adored by the children there. He brightened their day with his smile and good humor. They always looked forward to seeing him on the holidays when he would dress up in costume to fit the occasion. Up unto his passing, he kept himself busy working at Tioga Downs where he made many friends. In his free time, Stan loved to watch sports – especially the New York Yankees – any time was a good time to watch the Yankees even if that meant interrupting his wife, Geneva’s Hallmark movie! Although Geneva did manage to convince him to watch some Hallmark with her. He also was an admirer of the rock-n-roll music of the 50s and 60s and enjoyed listening to the tunes of Elvis Presley and Billy Joel. Stan will be greatly missed by all who knew him, including his wife of 17 years Geneva Braunbeck Harris of Nichols, NY; his mother Alice Whitcomb Harris of Waverly, NY; brother Donald (Virginia) Harris of Texas, sister Lynn (Jack) Harris Klossner of Candor, NY; brothers-in-law: Bill (Kathy) Jorgensen of Kansas and Arthur (Laurie) Jorgensen of Kentucky; his children: Sharon Harris (Chris) Allis of Owego, NY, Geneva Sheldon (fiancé Jim) Verno of Barton, NY, Stacy Sheldon (Will) Nixon of Smithboro, NY, Charles (Jordan) Sheldon of Waverly, NY, Scott (Molli) Harris of Marathon, NY, Peggy Sheldon of Marathon, NY, and Stacey (Chris) Harris Fox of New Berlin, NY. Stan was the proud grandfather of 17 grandchildren and 7 great grandchildren. Many nieces, nephews and their families also survive. Stan was predeceased by his first wife Sandra Jorgensen Harris; his father George Harris; and his sister Gail Harris Mile. Friends and family are invited to attend a funeral service on Tuesday, December 21st at 11 am at the Sutfin Funeral Chapel, Nichols, NY. A dish to pass luncheon will follow at the Moose on Rt. 17 Owego, NY. Stan wanted a party to be held when he passed, and so following his wishes, a celebration of his life will be held at a later date when the weather is warmer. Those who wish may kindly consider a memorial contribution to the American Cancer Society or American Heart Association in loving memory of Stanley Whitcomb Harris. Memories and condolences may be shared by visiting his guestbook at www.sutfinfuneralchapel.com

To Watch the Live Stream of Stan's Service [ClickHere]https://my.gather.app/remember/stanley-harris-2021 A limb has fallen from our family tree that says, grieve not for me. Remember the best times, the laughter, the song, the good times I... View Obituary & Service Information

The family of Stanley W. Harris created this Life Tributes page to make it easy to share your memories.

To Watch the Live Stream of Stan&#39;s Service
ClickHere

Send flowers to the Stanley family.