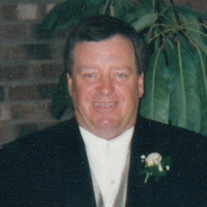 A life well lived is a precious gift, of hope and strength and grace, from someone who has made our world a brighter, better place… William M. Fuller, 73, of Rome, Pa passed away peacefully in his sleep on Monday evening, January 29, 2018. Bill was born on March 15, 1944 in Johnson City, NY a son of the late Herbert and Amelia (Klym) Fuller. He was a graduate of Northeast Bradford High School class of 1962. Following graduation he was drafted into the US Army and proudly served his country before being called home to assist with the operation of the family farm. Bill retired from IBM Endicott following 30 years of service. He was a member of the Wyalusing American Legion Post 534 and a social member of the VFW Post 6824 in Rome. Bill found great comfort in feeding the many birds and deer that would visit. He also enjoyed visiting and sharing stories with friends and family when not watching game shows and old westerns. Bill will be greatly missed by his wife of 47 years Marjorie; his children: Shawn William Fuller of Apalachin; Lisa Kay Fuller of San Diego, CA; his sisters and brother-in-law: Cheryl and Doug Waterman, Barbara Michel; his nieces and nephews: Kenny (Angie) Crown, Stephanie Lindquist, Jodi (Alan) Fanus, Ashly Michel, Jamie Michel, Mark Fuller, Chris (Steph) Fuller, Dan (Deb) Williams, John (Adrienne) Williams, Scott (Belinda) Williams, Shari Williams and Cindy Glowa; his mother-in-law: Zeta Ballantine; his sisters-in-law and brothers-in-law and their families: Linda and Richard Baumunk, Judy and Tore Larson, Susan and Wayne Johnson, Kathy Bradbury, Wendy Decker, Lloyd Jr. and Meme Decker, Cindy Ballantine, Paula and Wayne Pedro. Bill was predeceased by his parents Herbert and Amelia Fuller, brother John H. Fuller, brothers-in-law: Ronald Michel and Phil Bradbury and his faithful canine companions Noah and Dakota. Family and friends are invited to attend a period of visitation on Sunday, February 4th from 1 – 3 pm at the Sutfin Funeral Chapel, 273 S. Main St., Nichols. A memorial service and celebration of his life will follow at 3 pm with Deacon Michael Donovan, officiating. Memories and condolences may be shared by visiting his guest book at www.sutfinfunerlachapel.com Flowers will be provided by the family and memorial contributions may be directed to help in Alzheimer’s and Dementia Research in his memory. www.alzheimersanddementia.com

A life well lived is a precious gift, of hope and strength and grace, from someone who has made our world a brighter, better place&#8230; William M. Fuller, 73, of Rome, Pa passed away peacefully in his sleep on Monday evening, January... View Obituary & Service Information

The family of William M. Fuller created this Life Tributes page to make it easy to share your memories.

Send flowers to the Fuller family.