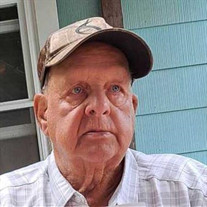 To Watch the Live Stream of Jerry's Service: ClickHere Goodbyes are not forever, goodbyes are not the end. They simply mean we'll miss you until we meet again. Gerald T. Singer, 79, of Nichols went to his heavenly home on Monday, January 10, 2022 following a brief period of declining health and is now reunited with his wife Hilda. Jerry was born on a warm summers day on August 19, 1942 in Montrose, Pa one of eighteen children of Hugh and Hazel (Lathrop) Singer. He was a graduate of Montrose High School. Shortly after graduation, Jerry went to work as a forklift operator for the Endicott Johnson Shoe Factory, his family states that “he closed the place down” as he was one of the last to leave when the factory closed. Always wanting to provide for his family, Jerry then went to work for Dimon & Bacorn, Inc. Following a long day’s work, Jerry enjoyed spending time fishing, the thrill of feeling a big pull on your fishing line, knowing you got a big one, was one of his favorite feelings. He loved being outdoors, whether it was hunting, taking a ride in his truck, gardening or just being outside, it was where he felt the most at peace. Mornings started early, as he enjoyed visiting and fellowship with a cup of coffee Gail’s restaurant. His soft presence and kind spirt will be greatly missed by all. Jerry will be greatly missed by his sons: Robert "Bob" (Jeannette) Singer of Newark Valley; William “Bill” Singer of Owego; and Hugh Singer (Carolyn Morrow) of Nichols; his grandchildren: Kristal Stevens, Tabatha Stevens, James Evans, Dwight Evans, Shawn Morrow, Christopher Singer, Danielle Singer, Hunter Singer and Hugh Singer, Jr., five great grandchildren. His siblings: Mary Rockefeller, Lloyd Singer, Doris Henry, Lucy Hanscom, Donald Singer, Lois Kulac, David Singer, Arthur Singer, Howard Singer, Martha Goff, Dawn Stallings and Mark Singer. Many, many, many nieces, nephews and their families also survive. He was predeceased by his parents; his wife Hilda on January 6, 1990; and siblings: Clara Smith, Louise Klim, Roger Singer, Betty Monaco and Susan Henry. Family and friends are invited to attend a period of visitation on Saturday, January 15th from 4 – 6 pm at the Sutfin Funeral Chapel, 273 S. Main St., Nichols. (masks will be required for those attending) A funeral service will be held at 6 pm with Pastor Alan Bill, officiating. Jerry will be laid to rest in the Nichols Cemetery. Memories and condolences may be shared by visiting his guestbook at www.sutfinfuneralchapel.com

To Watch the Live Stream of Jerry's Service: [ClickHere]https://my.gather.app/remember/gerald-singer Goodbyes are not forever, goodbyes are not the end. They simply mean we'll miss you until we meet again. Gerald T. Singer, 79, of Nichols went... View Obituary & Service Information

The family of Gerald T. Singer created this Life Tributes page to make it easy to share your memories.

To Watch the Live Stream of Jerry&#39;s Service:
ClickHere

Send flowers to the Singer family.