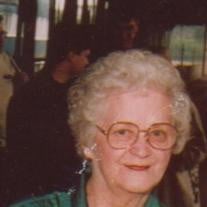 Irene R. Kotch, 88, of Warren Center, Pa went to be with the Lord on Tuesday, January 15, 2013. Irene was born on December 20, 1924 in Dickson City, Pa a daughter of the late Joseph and Sophie Vesnesky. She was a graduate of Richland Township High School and worked at Willy’s Overland Company in Toledo, Ohio doing corsair wings rivititng. On November 18, 1946 she married George Kotch and together they celebrated 66 years of marriage. Following the war, Irene became an hairdresser. For many years, she was a Brownie and Junior Girl Scout Leader in Levittown. Irene was a member of St. Francis Xavier Church in Friendsville. She was an avid reader, enjoyed gardening, cooking, crafts and will be remembered for her delicious cooking. Irene is survived by her loving and devoted husband George, her children: George and Cheryl Kotch of Shalotte, NC; Charles “Chuck” and Sandy Kotch of Warren Center, Pa; Linda Kotch of Levittown. Her special grandchildren: Christine (Francis) Chismar, Michele Williamson; great grandchildren: Hilary and Owen Williamson, Darien and Cole Chismar; a brother Joseph Visnesky of Levettown, PA; half brother Ronald Amistadi of Arizona; her sister-in-law: Pauline Kotch of Windber, PA; several nieces, nephews and their families also survive. Family and friends are invited to attend a period of visitation at St. Francis Xavier Church on Saturday, January 19th from 9:30 -10:30 am . A Mass of Christian Burial will be celebrated at 10:30 with Father Casimir Stanis, officiating. Interment and prayers of committal will be in the spring at St. Thomas Cemetery, Little Meadows. Memories and condolences maybe shared by visiting our website at www.sutfinfuneralchapel.com Those who wish may kindly consider a memorial contribution to the American Heart Association, The St Labres Indian School, PO Box 216, Ashland Montana 59004, St Jude's Children Hospital or a charity of one’s choice in loving memory of Irene R. Kotch. Caring assistance is being provided by the Cooley Family of the Sutfin Funeral Chapel, 273 S. Main St., Nichols. www.sutfinfuneralchapel.com

Irene R. Kotch, 88, of Warren Center, Pa went to be with the Lord on Tuesday, January 15, 2013. Irene was born on December 20, 1924 in Dickson City, Pa a daughter of the late Joseph and Sophie Vesnesky. She was a graduate of Richland Township... View Obituary & Service Information

The family of Irene R. Kotch created this Life Tributes page to make it easy to share your memories.

Send flowers to the Kotch family.