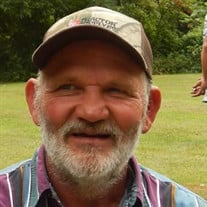 No farewell words were spoken, no time to say goodbye, you were gone before we knew it and only God knows why…..Lawrence “George” Adams, 57, of Owego passed away on Sunday, April 9, 2017. “George” as he was affectionately known by his family and friends was born on February 3, 1960 in Hammondsport, NY a son of Lawrence and Phyllis Adams. He was a graduate of Tioga Central High School and proudly served his county with the US Army. George was employed by the DSS Construction Company of Rochester. He was a member of the VFW Post 1371 Owego. An avid race enthusiast, George enjoyed watching NASCAR and cheering on Jeff Gordon. Although his greatest pleasure was being a Papa to his seven grandchildren. George is survived by his wife Patricia; his daughters Bridget Pinney; Brenda Mosher (Roman Pelensky); his parents Lawrence and Phyllis Adams; his brother Steve; and sisters: Phyllis (Richard) Brown; Melissa (Dana) Swansbrough; his grandchildren: Tabitha, Sabrina, Brennah, Krystyna, Mark, Alexander, and Kathryn. Special friends: Ray Ricci, Jess Shirley, and Chad Harding. Several aunts, uncles, nieces, nephews, and cousins also survive. Family and friends are invited to attend a period of visitation on Wednesday, April 12, 2017 from 5 to 8 pm at the Sutfin Funeral Chapel, 273 S. Main St., Nichols. A private family interment will be held on Thursday in the South Owego Cemetery. A luncheon and time of sharing memories will be held on Thursday, April 13th at 12 noon at the Owego VFW Post 1371. Memories and condolences may be shared by visiting his guestbook at www.sutfinfuneralchapel.com Those who wish may kindly consider a memorial contribution to Stray Haven, 194 Shepard Rd., Waverly, NY 14892

The family of Lawrence "George" L. Adams created this Life Tributes page to make it easy to share your memories.

Send flowers to the Adams family.