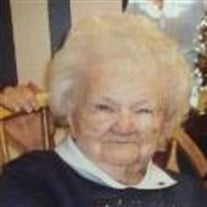 Margaret A. Pitcher, 103, of West Warren passed away on January 29th at Elderwood Skilled Nursing Facility in Waverly NY where she received loving care by their staff during the past three months. Margaret was born on February 1, 1911 at the family home, the oldest daughter of Jesse and Frances (Dewing) Brainard. Margaret was a very contented person; material things were not important to her. Her love was for her Savior, family and friends; her love was unconditional. She always took interest in others--their concerns and accomplishments--and had an amazing manner that always made everyone feel comfortable in her presence. All who knew her were blessed. Margaret attended the Warren Center School until the 11th grade and then boarded with families in the Towanda area to graduate from the Towanda High School in 1929. Margaret continued her education and graduated in 1931 from Mansfield Teachers College and then taught in a one-room school at Ghent PA. Margaret married Glenn Pitcher in 1935 and enjoyed raising their five children together. After the death of her mother in 1946, they moved to the 100 acre century-old farm to begin farming with her father. Margaret loved the farm and enjoyed all of the outside work and especially her gardening. She was thankful for the close bond with their families who were always willing to help each other and all the fun that they had together too. After her husband died in 1963, she needed to seek employment and taught at a school in Towanda then changed to work at Westons’ Department store in Vestal NY. She was also elected to the Office of Tax Collections for Warren Township where she served for 20 years. Margaret was a member of the West Warren Congregational Church serving many years as Sunday School teacher and superintendent plus actively participating in the Ladies Aid. She also served on the boards for the Dille Parish United Church of Christ and the Northeast Bradford School. Margaret was a fan of the NY Yankees and could also be found at many local games watching her grandchildren at high school basketball games and more recently at softball games where great grandchildren and others were playing. Many called her “Grandma”. Margaret is survived by her children: Elma Wheeler of Warren Center PA, Carl (Donna) Pitcher of Warren Center PA, Doris (Duane) Beavan of Endicott NY, and Ethel Pitcher and friend Tom Sechrist of Endicott NY. The grandchildren are: Nancy (Greg) Stockdale, Robert (Charlotte) Wheeler, Ron (Linda) Wheeler, Janet (Paul) Delameter, Judy (Joe) Ely, Rita (Thomas) Quimby, Glenn (Dawn) Pitcher, Michelle (Jeff) Haight, Jeff (Teresa) Pitcher, Melinda (Harold) Lake, Tom (Ruth) Beavan, and Phyllis (Dana) Guest. She is also survived by many great and great-great grandchildren, nieces and nephews, special sisters Minnie Brainard and Arlene Oakley. Margaret was predeceased by her beloved husband Glenn Pitcher in 1963; daughter Ruthie Weaver in 2009; son-in-law James Wheeler; sisters and brother: Laura Allyn, Theresa Rockwell, Albert Brainard, and Beatrice Oakley. The family will receive friends and family at Sutfin Funeral Chapel at 273 S. Main Street, Nichols NY on February 3rd from 1:00-3:00 with a service following with Pastor Dale Anschuetz. Memories and condolences may be shared by visiting our website at www.sutfinfuneralchapel.com The family will provide flowers and friends who wish may consider a memorial contribution to the First Congregational Church of West Warren, c/o Janet Brown, 2712 Sugar Cabin Road, Rome PA 18837.

Margaret A. Pitcher, 103, of West Warren passed away on January 29th at Elderwood Skilled Nursing Facility in Waverly NY where she received loving care by their staff during the past three months. Margaret was born on February 1, 1911 at the... View Obituary & Service Information

The family of Margaret A. Pitcher created this Life Tributes page to make it easy to share your memories.

Margaret A. Pitcher, 103, of West Warren passed away on January...

Send flowers to the Pitcher family.