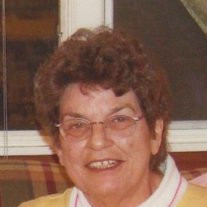 Sally joined her soul-mate, Marvin Haner, on January 25, 2013. He was waiting for her with Barney their faithful companion by his side. Born January 20, 1939, to Lewis Francis and Naomi Grace (Llewellyn) Short, she was nicknamed Sally by her big sister, Vivian. Sally never followed the easy path, but rather enjoyed blazing her own trails. A friend of Bill W for 31 years, Sally went to college late in life, choosing Addiction Counseling as her final career path. She had found her passion and she was sought after by many organizations. She worked for Clifton Springs Alcohol Rehab, Chit-Chat is Westfield, PA and The Dick Van Dyke Treatment Center in Willard, NY. It was at Willard that she picked up her last nickname, “Cocaine Sally,” because she worked with the cocaine addicts. Many lives were changed for the better because of her passion. Sally is survived by her children Donna (Dan) Martin and David Taylor, her grandchildren John (Crystal) Martin and their children, Emily, Hannah and Gideon of Lake Placid, Ashley (Peter) Martin and their children Micah and Abigail of Cortland, and Christopher Witty of Cortland and her sisters, Vivian Settel and Caroline Smith along with many nieces and nephews. In addition to her husband and parents, she was pre-deceased by her loving brothers, Alan, Lewis, Douglas, Frederick, Thomas, Gary and Danny Short, and several nieces and nephews. A period of visitation and time of sharing memories will be held on Wednesday, January 30th at the Nichols United Methodist Church from 11 to 12pm. A memorial service and a celebration of Sally’s life will follow at noon with Rev. Joyce Allen, officiating. Interment will be at the convenience of the family in the Gibson Corners Cemetery. Memories and condolences may be shared by visiting our website at www.sutfinfuneralchapel.com The family will be providing flowers and ask that memorial contributions be directed to Stray Haven, 194 Shepard Road, Waverly, NY 14892.

Sally joined her soul-mate, Marvin Haner, on January 25, 2013. He was waiting for her with Barney their faithful companion by his side. Born January 20, 1939, to Lewis Francis and Naomi Grace (Llewellyn) Short, she was nicknamed Sally by her... View Obituary & Service Information

Send flowers to the Haner family.