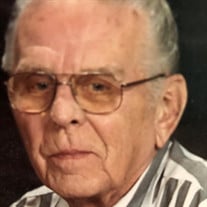 Richard "Dick" Hettich, 85, of Fort Myers Florida, passed away peacefully on March 5th, 2020 with his wife by his side. Dick was born November 7, 1934 in Towanda, PA. and was a 1952 graduate of Towanda Area High School. He served in the US Marine from 1952-1955 & was a Korean war veteran. On March 24, 1963 he married LoRita Wood in North Orwell Pa. He was well known for his great sense of humor & work ethic. He was a dedicated husband & father. You could always find him outside puttering around the house or sitting around the campfire with his good friends. Dick was a life member of the Amvets, Marine Corp league, Veteran of Foreign war, Towanda Gun club, and American Legion. He was the Past president & Zone Chairman of the Towanda Lions club who along with fellow members were instrumental in the formation of Wyalusing Lions club. He was a Commander of VFW 6924 Rome PA. He had also served as a Towanda School Board Director. Upon the passing of his uncle, Earl Stroud, Dick & his wife purchased Stroud’s Supply Inc. in 1984. He retired in 1997. He was proceeded in death by his mother Marian Hettich, father Stanley Hettich, grandmother Carrie Stroud & uncle Earl Stroud. He is survived by his wife of 57 years, LoRita of Fort Myers, Florida, his daughter, Carrie (wife of Brad Kurtz) of Willow Street, Pa., his son Duane (husband of Jennifer Hettich) of Tampa, Florida, his grandchildren Christopher (husband of Michelle Libonati) & Matthew Libonati, of Lancaster, Pa., Grant Joseph Hettich due in April 2020 & a great grandson Vinny Libonati of Lancaster, Pa. In lieu of flowers please send donation to Marine Corps League 6513 Burlington Turnpike, Towanda, PA 18848 Attention Roy Shrimp. A Service of remembrance will be held on Saturday, August 28th at 9 am at the North Orwell Cemetery. Memories and condolences may be shared by visiting his guestbook at www.sutfinfuneralchapel.com

Richard "Dick" Hettich, 85, of Fort Myers Florida, passed away peacefully on March 5th, 2020 with his wife by his side. Dick was born November 7, 1934 in Towanda, PA. and was a 1952 graduate of Towanda Area High School. He served in the US Marine... View Obituary & Service Information

The family of Richard "Dick" G. Hettich created this Life Tributes page to make it easy to share your memories.

Send flowers to the Hettich family.