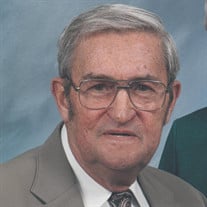 Softly in the morning you heard a gentle call, you took the hand God offered you and quietly left us all…..Stanley C. Youngs, 87, of Windham Twp., Rome, Pa passed away on Wednesday morning, August 29, 2018 at his home. Stan was born on April 4, 1931 in Belmar, New Jersey a son of the late Charles and Pauline (Doney) Youngs. He graduated from Morristown, New Jersey High School class of 1949 and proudly served his country with the United States Navy for four years during the Korean Conflict. On June 25, 1955 at St. Paul’s Methodist Church in Ocean Grove, New Jersey, Stan married Barbara L. Anderson and together they shared 63 years together. Stan was employed in the construction industry as a heavy equipment operator. He treasured the time spent with his family, enjoyed being outdoors, gardening, hunting and fishing. Stan was a member of the Sayre’s Sportsmen’s Club and also was an active member of the First Congregational Church of West Warren, Pennsylvania. Stan is survived by his loving wife Barbara; his daughter and son-in-law: Pamela Youngs-Maher (Larry Maher) of Baldwinsville, New York; his son Jeffrey Youngs of Batavia, New York; his granddaughter Marisa Maher of Baldwinsville, New York; a brother Robert A. Youngs of Enfield, Connecticut; several nieces, nephews and their families also survive. Stan was predeceased by his parents Charles and Pauline Youngs. Family and friends are invited to attend a period of visitation on Saturday, September 1st from 1 to 2 pm at the Sutfin Funeral Chapel, 273 S. Main St., Nichols. A celebration of his life will follow at 2 pm with Pastor David Pitcher, officiating. Interment will be held at the convenience of the family in the Valley Home Cemetery. Memories and condolences may be shared by visiting his guest book at www.sutfinfuneralchapel.com Those who wish may kindly consider a memorial contribution to the First Congregational Church of West Warren c/o Mrs. Judy Davenport, 3645 N. Rome Road, Ulster, Pa 18850 or Guthrie Hospice, 421 Tomahawk Rd., Towanda, PA 18848 in loving memory of Stanley C. Youngs.

Softly in the morning you heard a gentle call, you took the hand God offered you and quietly left us all&#8230;..Stanley C. Youngs, 87, of Windham Twp., Rome, Pa passed away on Wednesday morning, August 29, 2018 at his home. Stan was born... View Obituary & Service Information

The family of Stanley C. Youngs created this Life Tributes page to make it easy to share your memories.

Send flowers to the Youngs family.