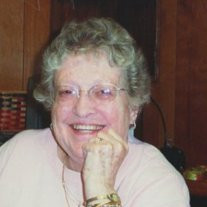 For over 40 years, the one thing that her children, grandchildren and great-grandchildren could count on was that Sunday mornings were special at Grandma Bowen's house. With coffee always on the table and Grandpa sitting there reading his paper,... View Obituary & Service Information

The family of Anna Bowen created this Life Tributes page to make it easy to share your memories.

For over 40 years, the one thing that her children, grandchildren...

Send flowers to the Bowen family.