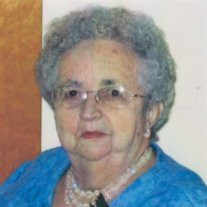 Bertha M. Davis, 86, of Potterville and Athens, Pa passed away on Sunday, March 31, 2013 following a period of declining health. Bertha was born on November 9, 1926 in Sayre, Pa and spent a lot of her childhood in North Towanda with her grandmother Bertha Granger and cousin, Joseph Tuttle. She attended the one room Pine Grove School, and Towanda High School. Following high school, Bertha worked at the Burlinger Silk Mill. After a courtship of mostly going to square dances, she and John J. Davis married in Towanda on November 15, 1947. They lived happy together on the farm in Orwell Township and then moved to Potterville where they lived for 46 years. After selling her home in Potterville she lived at the Chemung View Apartments in Athens until the flood in September 2011. She lost her apartment and most of her belongings in the flood. She moved once again, to live with her daughter Susan until finding an apartment in Interlaken, NY where she resided until her death. Bertha loved to sew, cook and care for her family. She never complained about cooking all the game and fish that John brought home for the family to eat. Her family always came first. Bertha was a member of the Neath Welsh Congregational Church where she was a member of the ladies aide, and served as treasurer for a time for the Sunday School. She later attended the West Warren Congregational church for many years. In addition, Bertha was a member of the Bradford County Motor Club where she and John loved to camp. They enjoyed traveling in their motor home, many times camping at various places for John to fish and Bertha to enjoy her camper and doing her embroidery crafts. Bertha was predeceased by her parents Mary Beatrice (Swain) and Harold M. Tuttle; her husband John Jesse Davis; sister Marian Zeigler, sons-in-law: Donald R. Knowlton and Donald R. Dow. Bertha is survived by her daughters: Gloria Davis of Tucson, AZ; Joan Davis of Rome, Pa; Susan (J. Andrew) Alexander of Lodi, NY; her grandchildren: Davis Knowlton of Trumansburg, NY; Bettina Knowlton of Rome, Pa; Jesse Alexander of Lodi, NY; Jason (Michelle) Davis of Portland, OR; great grandchildren: Johnathan Eastabrook. Ashley Knowlton, Lilly Knowlton, Ariana, Isabel and Andrew Davis; and a nephew also survive. Family and friends are invited to attend a period of visitation and time of sharing memories on Thursday, April 4th from 11-12 pm at the West Warren Congregational Church. Funeral services and a celebration of her life will follow at noon with Rev. David J. Pitcher. Interment and prayers of committal will be in the Neath Cemetery. Memories and condolences for Bertha’s family may be shared by visiting our website at www.sutfinfuneralchapel.com Those who wish may kindly consider a memorial contribution to the West Warren Congregational Church in memory of Bertha M. Davis.

Bertha M. Davis, 86, of Potterville and Athens, Pa passed away on Sunday, March 31, 2013 following a period of declining health. Bertha was born on November 9, 1926 in Sayre, Pa and spent a lot of her childhood in North Towanda with... View Obituary & Service Information

The family of Bertha M. Davis created this Life Tributes page to make it easy to share your memories.

Bertha M. Davis, 86, of Potterville and Athens, Pa passed away...