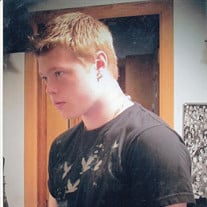 Maybe it was the mop of red hair that let you pick him out of the crowd or his laugh that sang out bright, contagious to anyone around him. It could have been his love of music, the endless sound of his guitar landing in all the right places just when you needed to hear it most, or the fact that no matter what he did, Casey always thought of everyone around him first. The many facets of Casey Anthony Quick will continue to glimmer in the hearts of all who loved him because each little piece of him is what made him the absolute gem that he was. Born on May 24, 1988, to Jeffery and Linda Jorgensen Quick, Casey grew up in Nichols in a home focused on family, love, kindness, and compassion, characteristics that Casey took with him into adulthood. From the time he was a little boy, Casey sparkled with positivity and compassion for life and people. As a small child, his belief in paying it forward and helping those in need was evident. Whether he was helping out his grandparents, doing community service as a Boy Scout, taking part in the Nichols Little League, or collaborating with his bandmates writing music, Casey spent his whole life radiating optimism. Casey also embraced the little pieces of him that made him a diamond in the rough and a bit of a Renaissance man. His best friend was his Grandma, and they would spend hours talking to each other in fluent Spanish. As a teenager, Casey co-opted the house and always had friends over, ever the social butterfly. He loved animals of all kinds and especially adored his cat, Eleanor. Casey also seized every moment that presented him an opportunity to learn, spending hours reading, including his favorite story, The Dark Tower, by Stephen King. When he wasn’t visiting his grandparents or losing himself in a book, he could be found watching all kinds of movies, memorizing lines and, with a wink and a smile, using them in everyday conversation. In high school, he excelled in AP History and was proud to be a member of the National Honor Society, and his passion for writing followed him from grade school through college. But it was music that was Casey’s muse. He didn’t just play guitar and saxophone, but his passion went further and saw him develop a critical understanding of the theory and structure of music. In 2006, after he graduated from Tioga Central High School, Casey attended Broome Community College where he majored in Music and then transferred to Binghamton University to further his education studying Psychology. Following in his father’s footsteps, Casey has worked the past few years as an industrial painter at Hilliard Corporation, but in the arms of music is where Casey was truly himself. As a former member of the band The Last Ten Seconds of Life, Casey toured up and down the east coast, and when not on the road or at work, he could be found jamming and playing music with his life-long best friend and hero, Blaze. On Friday, February 24, 2017, Casey decided to join his dad, Jeff, in a place where music, laughter, and love are guaranteed. Those who will remember his unwavering warmth, energy, and his love of life include his mother, Linda, and her fiancé James Franzese, his maternal grandparents, Rosario and Richard Frost, paternal grandparents Robert S. and Betty Quick, all of Nichols, his aunts and uncles, Jim and Karen Jorgensen, Gary Jorgensen, Michael Frost, and John Quick, his cousins, Shawn, Brandy, Ryan and Carman, his best friend, Blaze Dinmore and his girlfriend, Shannon Ryan, and his countless friends, both near and far. The family invites those who knew and loved Casey to share in remembering the gift of his life on Saturday, March 4 from 11 to 1 pm at the Sutfin Funeral Chapel, 273 S. Main St., Nichols. A memorial service and celebration of his life will follow at 1 pm. For all of his energy and the golden shimmer he gave to the world, in his 28 years, Casey lived happily, simply, and humbly. He made a difference in the lives of many, although he probably never noticed, as that was not his way. Casey chose to live what he loved, embodying the immortal words of Gary Robert Rossington and Ronnie Van Zant: And be a simple kind of man Oh, be something you love and understand Baby be a simple kind of man Oh, won't you do this for me, son, if you can.

Maybe it was the mop of red hair that let you pick him out of the crowd or his laugh that sang out bright, contagious to anyone around him. It could have been his love of music, the endless sound of his guitar landing in all the right places... View Obituary & Service Information

The family of Casey A. Quick created this Life Tributes page to make it easy to share your memories.

Maybe it was the mop of red hair that let you pick him out of...

Send flowers to the Quick family.