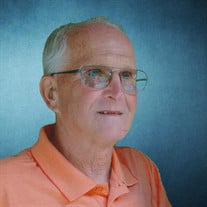 Charles R. Merritt, 78, formerly of Apalachin, NY and currently residing in Rome, PA passed away on September 27, 2015 following a brief period of declining health. Charles was born on July 5, 1937 in Johnson City, NY a son of the late Charles A. and Vivian M. (Sickler) Merritt. He was a graduate of Vestal High School class of 1955. On July 25, 1959, he married Dorla C. Allis and they made Apalachin their home. He retired from IBM-Endicott following nearly 25 years of service. Charles and Dorla moved to Rome in 2005, to enjoy their retirement and the beauty of Bradford County. He enjoyed spending time fishing, camping, woodworking, and especially treasured the time he spent coaching his children and being able to watch his grandchildren play in sports. Charles was a member of the Rome United Methodist Church where he served on many committees. Charles will be greatly missed by his loving wife of 56 years, Dorla; his daughter and son-in-law: Janelle and Timothy Schmitt of Owego, NY; his son and daughter-in-law: Michael and Kelly Merritt of San Antonio, TX; his special grandchildren: Madison Merritt; Michael Paul Merritt; Phillip and his wife Brette-Ashley Schmitt; Tara Schmitt; a great granddaughter Emerson Schmitt; brother and sister-in-law: Terry and Kathy Merritt of Pinehurst, NC; brothers-in-law and sisters-in-law: Norman and Janet Allis, Wayne and Judy Allis, Marilyn and Michael Brainard, Donna and Jon Park, Kevin and Sally Allis, Kenneth and Anna Allis; several nieces, nephews and their families also survive. Family and friends are invited to attend a period of visitation on Friday, October 2nd from 5 to 8 pm at the Sutfin Funeral Chapel, 273 S. Main St., Nichols. A period of visitation will also be held on Saturday, October 3rd from 2 – 3 pm at the Rome Methodist Church. A memorial service and celebration of his life will follow at 3 pm with Pastor Jackie Condon, officiating. Memories and condolences may be shared by visiting our website at www.sutfinfuneralchapel.com Those who wish may kindly consider a memorial contribution to the Rome United Methodist Church, c/o Karen Matoushek, Treasurer, 436 Williams Rd., LeRaysville, PA 18829

Charles R. Merritt, 78, formerly of Apalachin, NY and currently residing in Rome, PA passed away on September 27, 2015 following a brief period of declining health. Charles was born on July 5, 1937 in Johnson City, NY a son of the late Charles... View Obituary & Service Information

The family of Charles R. Merritt created this Life Tributes page to make it easy to share your memories.

Send flowers to the Merritt family.