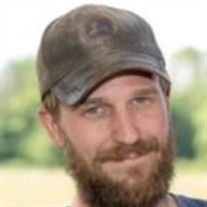 A limb has fallen from our family tree that says grieve not for me, but remember the best times, the laughter, the song, the good life I lived while I was strong… It was a spring day on March 5, 1992, that our hearts were blessed with the arrival of Cody John Wagner. He was a bright light and the proud son of Richard and Victoria (French) Wagner. Our light quickly went out on Saturday, June 19th, 2021 with the sudden passing of Cody. A hardworking and dedicated woodsman, Cody assisted his father in the operation of Wagner & Son Logging. He often took refuge and solitude in the outdoors. Accompanied by his metal detector, Cody would take long walks in the woods and often would come back with his hands full of unique objects, rocks and fossils he found along the way. Happiness was often found walking in the woods with this girls or fishing at the pond. A hands-on kind of guy, Cody also enjoyed woodworking. The day was complete when Cody would have a friendly visit with his friends John Fedorchak, Ron Cope ,Chris Joyce and Jon Reagan ~ their kind words of encouragement meant so much to Cody. Cody was always friendly and was happy to give a helping hand to anyone who needed it. He enjoyed visiting with people and touched many hearts in his twenty-nine years. In addition to his parents, Rich and Vic Wagner, Cody will be dearly missed by the apple of his eye, his daughter Kensley affectionately known as “Punk” by her dad. His sister Jennifer “Jay” and her husband Rich Cole; his favorite nephew Kayden and niece Leah; his girlfriend Kristin Curtis and her two daughters Alyssa “Meg” and Kira “Sprout”. Several aunts, uncles ~ including Pat and Alfie Wendela and Charlie and Sandy Reese. Many cousins, his good friends and fellow woodsmen Jack, Andy, Shawn, Tim, and Dan; and his canine companion Axel. Cody was welcomed into heaven by his paternal grandparents Joseph and Mary Wagner; ;his maternal grandparents: Victoria and Norman French. A period of visitation will be held on Saturday, June 26th from 4 to 6 pm at the Sutfin Funeral Chapel, 273 S. Main St., Nichols. A celebration of his life will follow at 6 pm. Memories and condolences may be shared by visiting his guestbook at www.sutfinfuneralchapel.com Those who wish may kindly consider a memorial contribution to an educational fund for Kensley Wagner, c/o Community Bank, 41 E. River Road, Nichols, NY 13812 in loving memory of Cody John Wagner.

A limb has fallen from our family tree that says grieve not for me, but remember the best times, the laughter, the song, the good life I lived while I was strong&#8230; It was a spring day on March 5, 1992, that our hearts were blessed with... View Obituary & Service Information

The family of Cody John Wagner created this Life Tributes page to make it easy to share your memories.

A limb has fallen from our family tree that says grieve not for...

Send flowers to the Wagner family.